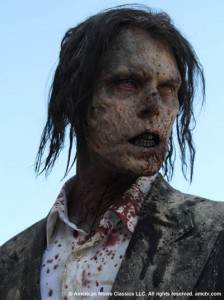 AMC, like HBO, is a channel that can be counted on for consistently good television. But now, the channel that brought us Mad Men and Breaking Bad is bringing us something that no other series right now has: zombies.

And they’re bringing them back pretty gorily. Some might have worried that the zombies would have been watered down for their transition to the small screen, but there’s absolutely no need for worry. These cannibalistic corpses are running full nasty for The Walking Dead, AMC’s adaptation of the Robin Kirkman/Tony Moore comic book cult classic.

The series, which will be directed by Frank Darabont (The Shawshank Redemption, The Green Mile, The Mist) currently has a six episode order for its first season, which will debut in October. The series, like the comics, will focus on a small-town sheriff and a group of survivors as they try to escape the zombie plague which has inexplicably appeared.

The series looks like a good one, and I’ll definitely watch it when it premieres. I’ve been waiting for zombies to get a series for a while, and now that it’s finally happening, I couldn’t be happier. Check out the promotional pictures below, but be warned: they’re kinda macabre.