We just posted sneak peeks for the upcoming April 6 new episode of V and now ABC has released promo photos for the April 13 episode, along with a synopsis. Check them out below. 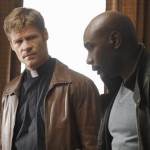 ANNA INVITES CHAD BACK ONTO THE MOTHERSHIP, TYLER CONFRONTS HIS MOM ABOUT HIS PAST, PLUS A LOOK INTO RYAN’S LIFE 10 YEARS AGO, ON ABC’S “V”

“John May” – Erica, Ryan and Jack go on a harrowing mission to find the legendary John May in order to rescue Georgie, Anna brings Chad aboard the Mothership for a story on her Live Aboard Program, and Tyler confronts his mom about his mysterious past, on “V,” TUESDAY, APRIL 13 (10:02-11:00 p.m., ET), on ABC.