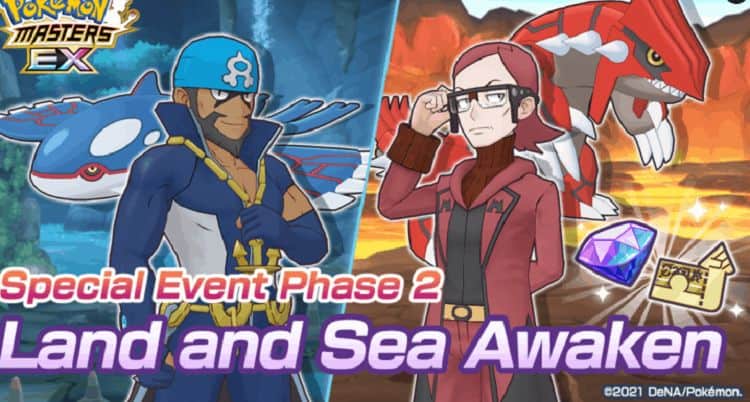 “In this event, players will earn and use weather survey tickets to battle against Legendary Pokemon Kyogre or Groudon, both of whom are causing abnormal weather conditions on the island of Pasio.” There are a few rewards that players can look forward to earning, including:

Pokemon Masters EX Special Event Phase 2: Sea and Land Awaken is a continuation of the Special Event Phase 1: Weather Alert event, and you will be able to start earning these rewards when the second phase of the event begins on May 16 at 11 PM Pacific Time and will continue to be available until May 27 at 10:59 PM Pacific Time. Players that log in at least once during the event period will be eligible to receive the bonus rewards and the Team Magma or Team Aqua badge.

There are also some additional bits and pieces of content that are now available within Pokemon Masters EX, including:

According to the official Pokemon Masters website, this is the first community event within Pokemon Masters EX. “In Special Event Phase 2, rewards can be earned based on the total number of battles completed by all players. These rewards get better and better each time a certain number of battles are completed.” It’s important to note that the rewards will not be immediately available, and will be sent out at a later date, of which is currently unknown.

This event is bound to be one for the Pokemon Masters EX history books, and hopefully it goes well, so that we might be able to see more community events like this in the future. Until then, good luck on your mission to defeat the Legendary Pokemon Groudon and Kyogre (but go for Kyogre more, because the Team Aqua Pin is super cool!)