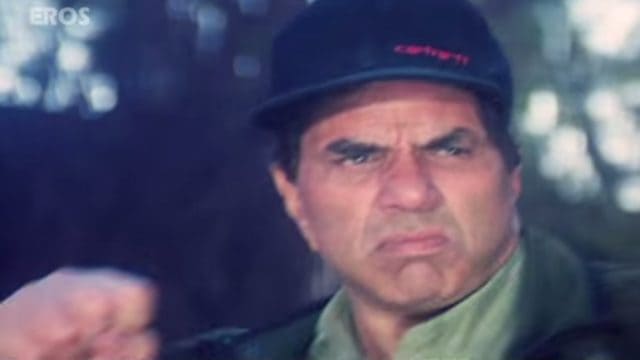 Who knew you could punch a guy more than once in the same place and not leave a mark? As one of the most unenthusiastic fight scenes of all time this would certainly go down in history if anyone bothered to look at what movie it’s from. It’s pretty obvious that everything is dubbed and that the story was written by someone that thinks they know how to write, but worse than that is, well, everything.

Even the lead up to the fight is as corny as it can get, with two fat thugs laughing and chortling away as the people they’re robbing or collecting from, it’s hard to tell really, stand nearby looking helpless and even a little annoyed. And then of course the hot female lead comes over and berates them, to which they reply by first giving chase. If she was in any better shape she could have simply outrun them, but that would have surely robbed any and all chance of her showing just how pleasingly bouncy she is, a fact that was obviously planned for. Oh how I wished I could write my own version of this, it might be hilarious.

Anyway, the thugs catch up to the woman, pull her hair, and then strip her top off as the camera pans away. Don’t worry, she’s still got a bra on but now looks even more helpless as she realizes she’s almost naked on top. But lo and behold, a hero is nearby, and he’s seen the whole thing, and….hasn’t done anything until that moment.

Okay, okay, benefit of the doubt and all that. But once he sees she’s in trouble he tosses her a flag first to cover up. What a gentleman. Then he proceeds to berate the thugs who obviously aren’t afraid of him until he delivers the first punch, then the second, and then so many that the thugs are finally rendered unconscious, I think, as they slowly drift down to the ground in a pitiful embrace. Yeah, Â I had to stomach it so you do too.

Anyway, the guy’s punches are part of what bothers me, and all for the fact that I’ve seen LITTLE GIRLS throw a harder punch than this guy, and without telegraphing it as much. Plus, he looks more annoyed that he has to get into this scrap than anything. And really, who gives a woman a flag while allowing her to stand almost naked next to a couple of goons? It was almost as if this guy was saying “Here ma’am, as much as I don’t want to get into this now it seems I have to since your nudity has inspired me. Now cover up so I can beat the living tar out of the bad guys.”

And you’ll notice that one of the bad guys keeps grabbing one portion of his face no matter where it seems like the punches might land. The other guy just looks like he got goosed each time the hero threw a punch. All in all I’d say that the woman had the best part.