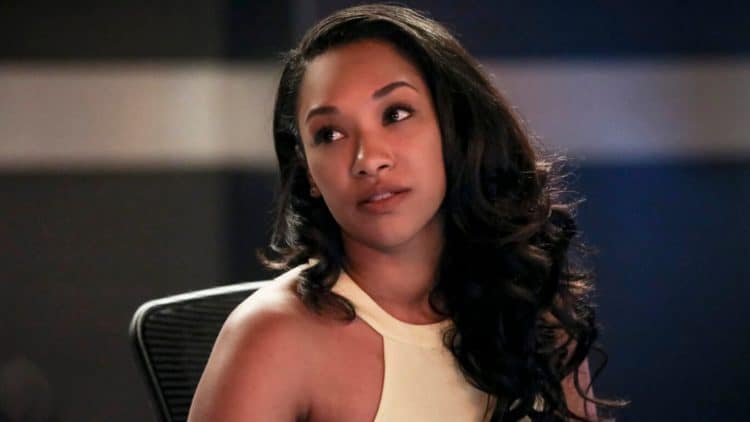 Boy, The Flash series certainly has come a long way. I’m nearly finished with season 6 and like what I’m seeing so far. Now I know I’m done with it yet, but I do have an idea on how it ends. Watching the trailer for the next season will do that. So I know that Iris West is in a bad situation. I don’t know how she’ll get out of it, but it will lead to some interesting conflict. What I’ve always thought about Iris is actually critical to Barry Allen’s development. She hasn’t always been his chief motivation, but she was always the biggest positive reenforcement to his heroism.

I really like how their chemistry has built over the years. They began as best friend/adoptive siblings, and their romance didn’t blossom right away. Barry had to work towards his relationship with Iris and when he finally got her, he earned it. They fell in love, got married, and they’re supposed to have a daughter named Nora. It sounds like the perfect love story, but comic fans know that their romance doesn’t end well. Call me a pessimist, but I have a feeling that the show will take a similar route.

So what would happen if Barry lost Iris? We’ve already seen what that would be like, at least a version of it. Back when Savitar was supposed to kill her, Barry traveled to an alternate future where he actually succeeded. Barry lost the love of his life and his team disbanded. It took the convincing of the present Flash to get that version of Barry back to where he was, but it was just sad to see how the death of Iris affected the whole team. Barry entered the deepest state of depression and it took him years and some serious convincing to get past it. I would’ve loved to have seen more of that, but maybe we can actually see that in the main timeline.

For all you other DC comics nuts out there, you know how Iris’ story played out. Well, in the pre-Flashpoint era at least, there was some serious tragedy. The short story is that she died, but then she came back. Yeah, that’s typical comic book fashion, but do we know that the show will do the same? Well, I’ll give the DC CW shows one thing, they sure like to embrace the corny comic book element that DC likes to thrive off of. From time travel, to alternate dimensions, to talking supervillain animals, these shows sell what DC flexes. I appreciate that, but what I particularly love about the Flash show is that it makes us care about the characters.

I mean, a show is supposed to do that anyways, right? Well, if we’re talking about just the CW shows, The Flash series has done the best at developing its characters. I’ve written about this before, but I want to stress on it, because this show is carrying all the weight. Arrow is done and the reaction to Oliver Queen’s death was met with polarizing reactions. Understandable, and even Stephen Amell agrees. Supergirl is reaching its last season and it’s about time. I gave it a shot a while ago, didn’t like it. There can be a limit to the corniness.

Oh, and let’s not forget about Batwoman. Let’s be honest, hardly anyone watched it when Ruby Rose was still around. Now that she’s gone, even less people are watching it now. That’s another show I’ve tried to watch, but I didn’t make it past the first episode. I just didn’t dig it.

So if all of those other CW shows are underwhelming, we need The Flash to end on a serious high note. I reckon the series will end soon, but how it ends will determine everything. My theory: Iris’ fate will be a serious factor in how the show ends. When it comes to superheroes, their stories normally don’t have a happy ending. There is usually a lot of heartbreak, a lot of pain, and some heavy losses. What if Barry losses Iris?

Okay, we have an idea of what their future will be like. Will they still have Nora. I sure hope so, but in the original timeline, The Flash disappeared and Iris was left with raising Nora on her own. Well, we know how much Barry likes to alter timelines, so I reckon things will be different. What if Iris was the one who died and Barry was left with raising Nora? Or what if Barry just lost his way after the death of Iris and didn’t raise Nora? It’s not like she doesn’t have team Flash to help raise her (they’ve already met her after all), but life without both her parents will be hard for her.

Let’s just say it will happen. If it does, how will Iris die? Well, in the comics, she was murdered by Eobard Thawne, aka the Reverse-Flash. I mean, who else would it be? He vibrated his hand right through her head during a costume party and instantly killed her. Well, The Flash didn’t kill him directly afterwards, but before he tried to kill his next girlfriend, Barry remembered the pain he caused him and finally finished him. Yup, The Flash crossed the line, but he finally killed his archenemy. Whenever heroes cross that line, they never get over it overnight.

I have a feeling the show will take a similar route. I mean, in the comics, Iris didn’t stay dead, but no one really does. The show can do it a little different. However, I do believe it would be a serious turning-point for the show if the Reverse-Flash kills Iris. The guy has been a constant thorn in team Flash’s side for quite sometime now and no matter how many times they defeat him, he always finds a way to return. The story of The Flash began with Eobard Thawne and it’s only fitting that it ends with him.

He’s already caused so much pain in Barry’s life, but his ultimate act of villainy would be killing Barry’s wife. This would finally cause Barry to snap and kill Thawne once and for all. And of course, this would be after Iris gives birth to Nora, leaving Nora without her mother. I believe this would be more than enough to enrage Barry enough to kill Thawne. Sure, it’s a tragic ending, but hey, at least it would be better than Ollie’s death.

But seriously, if the The Flash wants to end on a high note, it must be willing to make some sacrifices. Heck, Barry’s story doesn’t have to end in tragedy. He can bounce back from the death of Iris, but it will take some time. I just think Iris dying and killing Thawne would give Barry the character development he needs to truly grow as a hero. What superhero doesn’t go through redemption?