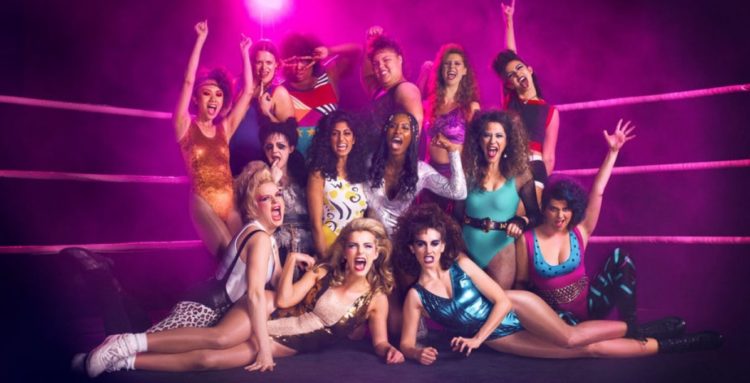 Thus far GLOW has been one of the hottest shows on Netflix and people have been absolutely loving it. In the world of professional wrestling the feeling has been that for a long time women didn’t get their fair shake and thanks to GLOW this was finally happening. It’s hard, if not impossible, to argue that fact since other wrestling promotions didn’t exactly go out of their way to promote women in a big way while GLOW was taking on the kind of talent that might have needed a bit of development but were still entertaining all the same. From season one until now the show has been nothing but entertaining as it’s shown the action in the ring and the lives of the wrestlers outside of it as well, creating a more complete accounting of a group of women that love to get in the ring and show what they can do, but are vulnerable just like anyone else on the outside. Season 3 is already looking to be nothing short of groundbreaking according to Laurence Mozafari of Digital Spy.

Her are just a few predictions we have concerning season 3.

5. Moving the show to Las Vegas is going to be disastrous at first.

Think about a business starting up and how many issues there are that have to be resolved before it can run smoothly. Now it’s true that the ladies of GLOW have been in the business for a while, but switching venues is also just as stressful and just as likely to cause the kind of issues that can prove to be disastrous to a reputation. It’s likely that the show is not going to go off without a hitch in Vegas at first and that things will get a lot worse before they get better.

4. Relationship issues are going to arise.

Anytime you’re in Vegas it seems likely that you’re going to fight with your significant other, friend, or whoever you’re with since the nature of the city is about where you can spend your money and what will it get you. Unfortunately the ladies of GLOW have their careers riding on this move so money is a big factor along with the exposure they hope to receive with this job. That being said, it’s very likely that a rift is going to form between a couple of women and stronger bonds might result from the same kind of stress that will tear some people apart.

3. There’s more to Sandy than we’re seeing in the trailer.

Marcus Jones of Entertainment Weekly gives an interesting take on the women of GLOW and how this coming season is going to be different since Vegas is not involved. But to be honest it feels as though there is more to Sandy than the trailer is allowed to show since with Geena Davis there is usually more to her character than you get to see. It could be that she’s simply a good businesswoman trying to set up what she thinks is a successful show, but all the same it does seem as though there’s something else hiding beneath that smile that could be a little more predatory than we might think.

2. Bash’s sexuality is bound to come forth and it’s going to be an interesting development.

Considering that this has been something of a well-kept secret the reveal of his sexuality could be something that acts like a truth bomb to a lot of the characters and might even set them against or simply away from him for a while as they try to absorb everything this means. Being gay back in that time was, after all, something that a lot of people still thought of as kind of odd unless they were a part of the lifestyle. But seeing as how Bash is still a part of the group it’s likely that it won’t last long since being gay doesn’t change who he is. Still, it does seem as though it might be enough to upset a few characters just for a bit.

1. A few of the ladies could possibly get TOO caught up in the glitz and glam of Vegas.

Kara Hadash of ScreenRant could be right when it comes to the idea that the ladies of GLOW will get a bit too caught up in the glitz and glamour of Sin City since it’s not too hard to imagine and it’s definitely not too hard to do. Even the average person will take a look at Vegas and become enchanted, and it’s been no different throughout the decades since the city has been designed to lure people in and make them think that everything they want is at their fingertips. For those that need to focus on why they’re in the city in the first place though this could be something of a disaster waiting to happen.

Come this August we’ll get to find out just what’s going to happen.