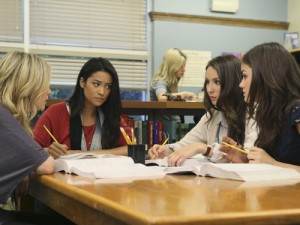 SMACK!!!!! That was Pretty Little Liars slapping me across my face tonight with an episode so epic that I don’t think I can do this recap any justice, but dammit, I will do my best to try. Kudos to the entire cast and crew of Pretty Little Liars for preparing us for one helluva summer finale with a spectacular penultimate episode!

Despite Having Numerous Problems, Pretty Little Liars Know That Their Future Education Is The Most Important Thing of Their Lives

While it’s storming like crazy outside the Hastings residence, Spencer, Hanna, and Aria discuss boys and the upcoming SATs they are preparing to take the next day. The girls (and us) wonder where the hell is Emily and we find out soon enough.

Emily has been out digging/playing in the dirt as if she was burying something, which is evident in her clothes and shoes. As Emily hides her evidence around the room, she gets a message from A, which says that Emily hasn’t buried her well enough and is nowhere near through with A. Emily, what the hell did you do?!?!?!

At school the next day, the girls find out that the SATs might be in jeopardy of being postponed due to the storm, but since they are there, they might as well wait and study until they get the official word. The girls are also shocked to find Det. Wilden’s ass there, but he is questioning kids on the vandalism of Alison’s memorial, which horrifies the girls.

Emily shows up later and Det. Wilden taunts her with information that Toby is alive and well. Afterwards, she meets up with the 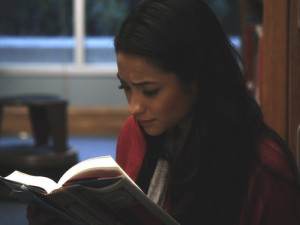 girls in the school library and they discuss the situation of Alison’s memorial, but are mostly focused on studying and their individual problems of the week. Emily gets another text from ‘A’ which talks of the book “Great Expectations”, which Emily looks extremely perturbed about it. Det. Wilden approaches them and questions them of their whereabouts the night before, but while all the girls tell the truth, Emily lies about her whereabouts, which the girls find out later and call her out for it. In a frustrated huff, Emily leaves the group and goes to the stacks to study, but finds the book Great Expectations and finds a letter she wrote that was addressed to Alison. Creepy!

The letter causes Emily to recollect two memories of Alison with the first being when she first kissed Alison after hearing Alison recite a passage from “Great Expectations” in the library stacks. The second memory entails Alison undressing in front of Emily and rebuffs Emily’s advances. Emily, of course, is hurt. In the present, Emily is jerked from memory lane when she realizes that all the lights are out and the kids have been moved to another location. Emily also realizes that she is not alone in the darkened library. While she tries to see who’s playing with her, the culprit takes her bag… with the letter to Alison in it. Uh-oh…

When Emily makes her way to the other students in the girls’ locker room, Hanna confronts Emily about her lies and immediately implies that Emily must’ve been with Maya. As they debate this thorny subject, Det. Wilden bursts into the room and demands that Emily comes with him so he can show her his discovery. Hanna, Spencer, and Aria follow them. When Wilden and Emily get to a 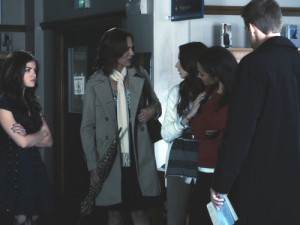 classroom, he shows Emily her bag and the stuff that was in it just as the other girls show up. He also shows Emily a photo of her standing over the vandalized memorial. The girls balk and Emily looks guilty, but not for defacing Alison’s memorial. Wilden then pulls out one of the statues on the iron bowl that was destroyed and starts throwing accusations at Emily about being in cahoots with Toby and killing Alison, pointing at her muddy shows as evidence. Emily finally snaps when Wilden wields the letter and forces her to confess her feelings for Alison, which she tearfully does in front of the girls.

Before Wilden can carry on, Mrs. Hastings enters the room and the girls tell her that Wilden accused Emily of Alison’s murder. Not only does this infuriate Mrs. Hastings, who is a lawyer of sorts, but she also calls Wilden out for questioning minors without an adult present, therefore rendering everything Emily just said inadmissible in court. She then tells Wilden that he can forget about going further with the case, because it’s all over for him. Get ’em, Mrs. Hastings!!!!

After that, Aria comforts Emily by claiming that Alison loved Emily, but not the way Emily loved her. In other words, they accept Emily’s sexuality. Meanwhile, the Black Gloved Bandit aka “A” sends makes a video of Alison telling the cameraperson that she knows that they want her. The Black Gloved Bandit then seals the jump drive in an envelope addressed to the police. Dun, dun, DUN!

Pretty Little Girls Know That You Must Be Careful What You Wish For, Because It Might Show Up At A Bad Time…

Aria still is being hounded by Hanna about Noel, who still has an interest in Aria. But Aria has more trouble in the form of Ella, 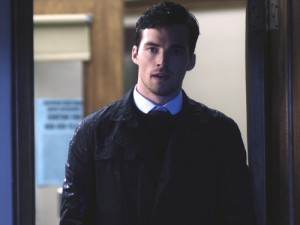 who shows up to help proctor the exam and their ‘reunion’ is sour since Aria is not ready to deal with Ella’s abrupt departure from their home. Later, Aria lets Noel steal her away from the other kids and they go to the music room, where they bond over their love of music. Aria belts a tune while Noel strings the guitar and the chemistry is so electric that they move in for a kiss… only to be interrupted by EZRA!!! Damn, talk about bad timing!!!!

After Noel leaves, Aria unleashes her fury onto Ezra, who stoically says that while he was gone, all he could think about was Aria, but just because he’s back, doesn’t mean that they can pick up like before. Later, Ezra has an awkward conversation with Elle about Aria’s behavior post parental split. Ella comments that she’s worried, because once Aria is hurt, she clams up. Seems like both people are giving each other advice on Aria. Wonder if they will use said advice?

Later, Aria decides to give Noel a chance, and he’s ready to take the plate.

Meanwhile, the Byron and Ashley storyline is heating up after their time together during the storm, where the difficulties of divorce is discussed over whine and candlelight. Byron then takes it a step further and asks Ashley to a dinner he must attend and she accepts… until the lights come back on. Byron rescinds his invite and Ashley claims that she has plans the night of the event anyway. Oh, boy, this is going to get ugly…

Hanna and Lucas both share a laugh when they notice that Mona is one of the winners of Hanna’s purse. But Mona is too busy to notice this due to her insulting Lucas so hard that I wanted to smack her face in. Later, Lucas is still giggling over the irony of Mona, who is still going at Lucas, but this time from a distance and Hanna is the unfortunate listener to her voice. After Mona accuses Lucas of stalking her, Hanna corrects Mona by announcing that Mona’s ‘new’ bag is actually her used one. Mona plays this off, but starts digging into Hanna’s business about the sudden friendship with Lucas and Hanna’s finances, which Hanna avoids. 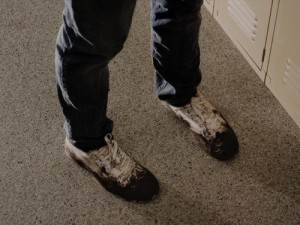 After Mona continues with her hate tirade against Lucas, Hanna finally teaches the wannabe a thing or two about life and how Mona’s only picking on Lucas cause she was him two years ago. Mona gives some off the cuff rebuff, but I tune her out cause I am sick of her. Moving on…

Later, Lucas thanks Hanna for sticking up for him and they have a little heart to heart. Too bad that Hanna didn’t notice that Lucas’s shoes were caked with mud. Wait… WHAT?!!!

Spencer still hasn’t told her mother about Alex, who she thinks her mom will not approve of due to his social status. When Alex comes to Spencer’s school to take the SATs, Spencer introduces him to Mrs. Hastings, who instantly knows him… and Alex knows her as well. Um, what the hell?!? Spencer spots this and hounds Alex all day to explain how he knows her mother, but Alex constantly dodges her until he claims that he can’t reveal that information to her. Is Mrs. Hastings a cougar? And if so, was Alex her prey? 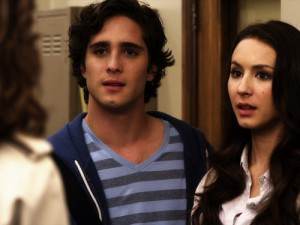 troubled soul. Turns out that Alex was a listening ear when he found Mrs. Hastings drunk off her ass, because she was wasted after having a lump removed from her breast. Mrs. Hastings kept this from everyone, because imperfection is not tolerated in their family and didn’t want them to know she was sick. After opening her heart, Mrs. Hastings gives Spencer her blessing (and approval) for going after Alex, which Spencer does with the quickness.

So after that phenomenal episode, I am so worried about what we will get next week because 1) the writers and crew will have to top this one and 2) it will be the last episode for a while. What are we going to do, people?!?!?!?

See you next week for an explosive finale!