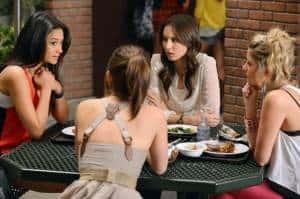 We’ve been gearing up for the return of Pretty Little Liars by posting scoops on the Liars’ relationship statuses, as well as whether Hanna and Mona have a chance of repairing their fractured friendship after Mona’s reveal as “A”. And while we’ve posted some sneak peeks for the premiere, now something even better has been released: the first 10 minutes of the season 3 premiere.

Here’s what we know: after the events of the season 2 finale (“A”‘s unmasking and Maya’s death), the girls went their separate ways for the summer. Now they’ve gathered together again to discuss their summer activities. Hanna spent time with Caleb, while Spencer spent time taking college classes at Hollis. But while Aria, Hanna and Spencer seem happy, Emily obviously has problems and she’s trying to deal with those by engaging in some heavy drinking.

The girls have also come together to lament the fact that their days as news items won’t soon come to an end, especially if Mona decides to talk or as Garret’s trial approaches. But the situation becomes creepy again very quickly. After waking up from their sleepover, the girls discover that Emily has disappeared. Where is she? She’s dug up Alison’s grave, only to find her coffin empty, and she doesn’t remember how or why she came to the graveyard.

Who instructed Emily to go to the graveyard? What happened to Alison’s body?

Watch the first ten minutes of the premiere below and tune in to an all new episode of Pretty Little Liars on June 5 at 8:00 p.m. ET/PT on ABC Family.