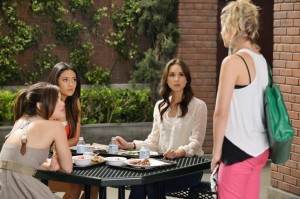 Season 2 of Pretty Little Liars revealed “A’s” true identity: Mona. But despite the fact that Mona is locked up in an asylum, we know that there’s a whole team of people that helped her torment the girls. The show also ended the way it began: with the shocking death. This time the victim was Maya, whose body was found in the finale. When the show returns next month, a summer will have passed in Rosewood, with each of the girls engaging in separate activities: Aria taking a photography class, Spencer taking college courses at Hollis, Hanna taking cooking classes with Caleb and Emily building houses in Haiti. But the girls aren’t over the torment they have faced since the death of Alison. In fact, they each start getting mysterious text messages once again. How is this possible, with Mona firmly tucked away? That’s the question on the girls’ minds.

They’ll soon come to realize that they can never escape their pasts and will delve into all new mysteries this summer. With mysterious new characters coming to town, and an “A” team to hunt down, the pretty little liars will once again have to fight an invisible attacker in order to keep their secrets from being exposed.

Watch the first official promo below for season 3 of Pretty Little Liars, set to premiere Tuesday, June 5 at 8:00 p.m ET/PT on ABC Family. You can also browse through photos for the season premiere here.