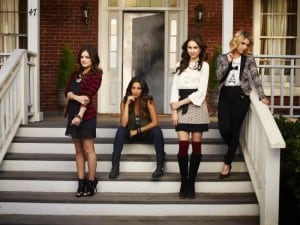 ABC Family has a full, original line-up in June with the premieres or returns ofÂ Pretty Little Liars, Switched at Birth, The Fosters, Twisted, Melissa & Joey,Â and Baby Daddy. The network has provided short teasers for the June episodes of these shows and while they don’t reveal much, they’ll certainly pique your interest.

Tuesday, June 4
Pretty Little Liars “A Liars Guide To Rosewood” (8:00 PM – 9:00 PM ET/PT)
A new special encompassing all three previous seasons of “Pretty Little Liars” recapping the Liars history with “A,” from the very first text message to the most recent spotting of Red Coat featuring new voice over from the all-seeing Mona.

Wednesday, June 5
Melissa & Joey “Toxic Parents” (8:00 PM – 8:30 PM ET/PT)
Mel dates a guy whose ex-wife happens to be dating Joe. Lennox is tempted to get a tattoo, while Ryder misses being in school.

Monday, June 10
Switched At Birth “Mother and Child Divided” (8:00 PM – 9:00 PM ET/PT)
Daphne and Bay both get jobs and both move in with their biological parents.

The Fosters “Consequently” (9:00 PM – 10:00 PM ET/PT) – watch sneak peeks
Callie is accused of selling pills around school, and Lena and Stef decide not to punish Brandon, which causes tension among the parents.

Twisted “Pilot” (9:00 PM – 10:00 PM ET/PT) – watch sneak peeks
A charismatic sixteen-year-old with a troubled past reconnects with his two best friends from childhood. But he suddenly becomes the prime suspect in a murder when a fellow student is found dead in her home.

Wednesday, June 12
Melissa & Joey “Inside Job” (8:00 PM – 8:30 PM ET/PT)
Joe gets a new job that quickly lands him in the middle of a political scandal that could also jeopardize Mel’s career. Meanwhile, Lennox is acting in a play that includes a kiss from a fellow classmate — not her boyfriend.

Baby Daddy “The Wheeler and the Dealer” (8:30 PM – 9:00 PM ET/PT)
Ben takes the lead on an endorsement opportunity for Danny, against Bonnie’s advice. Meanwhile, Riley and Tucker volunteer at a hospital.

The Fosters “Hostile Acts” (9:00 PM – 10:00 PM ET/PT)
Mike asks Brandon to move in with him, and Jesus and Lexi continue to keep their relationship a secret from Mariana.

Twisted “Grief is a Five Letter Word” (9:00 PM – 10:00 PM ET/PT)
Danny and his mother host a dinner for Jo and her parents but her dad takes advantage of this to search for evidence that will link Danny to the murder of Regina. Meanwhile, Lacey is learning to grieve for her friend.

Baby Daddy “New Bonnie vs. Old Ben” (8:30 PM – 9:00 PM ET/PT)
Bonnie moves into the city…right across the hall from the boys. Danny sends mixed messages to Amy when she sees him holding a ring.

Monday, June 24
Switched At Birth “The Good Samaritan” (8:00 PM – 9:00 PM ET/PT)
Bay is upset that Toby is giving up music and gets him a gig to reignite his love for music, and Bay and Daphne finally begin to make up.

The Fosters “QuinceaÃ±era” (9:00 PM – 10:00 PM ET/PT)
Everyone is celebrating Mariana’s quinceaÃ±era, and the secret Jesus has been hiding comes to light, which causes tension between Mariana and Lexi.

Twisted “PSA de Resistance” (9:00 PM – 10:00 PM ET/PT)
Green Grove High School is putting on a skit for Sobriety Awareness Day and in order to step outside of her academic bubble, Jo volunteers to be a part of it, but with a disastrous consequence. Meanwhile, Kyle confronts Karen about the missing photograph of Aunt Tara’s necklace that will connect Danny to Regina’s murder.