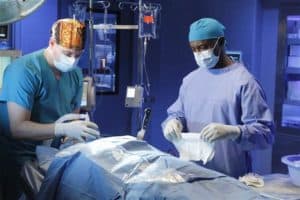 I may be alone in my assessment of “Blind Love,” but I thought it was tired, and devoid of originality. Nothing about it was satisfying, amusing, tenderhearted or unexpected. Charlotte’s rape storyline was done beautifully, don’t get me wrong. They didn’t pull any punches, they showed what a huge mistake it is to withhold a crime from the police. All of the repercussions of being raped, as well as those of not reporting were well developed and although horrid to watch, made for exemplary storytelling. I was riveted. The “conclusion” of the story, revisiting something that has already been done on the show this year was unacceptable.

In the first episode of season 4 we were still dealing with the after effects of the auto accident that put Naomi and Sam’s daughter, Maya, and her newborn baby’s life in jeopardy. And the drunk driver responsible? His life was in the hands of – Sam. How many times are the people of Oceanside Wellness Center going to be put into these same positions? Charlotte runs the hospital where her rapist is now seeking treatment for a knife-wound to the chest. All of her friends work there, everyone knows what he did and who he is. Does she want to let what he did to her change who she is and what she stands for for eternity? Exact same position Sam was in when treating the drunk driver. A disappointing end to an otherwwise well executed dramatic story.

Speaking of disappointing endings, let’s chat a moment about Addison and Bizzy. We knew Susan wasn’t going to survive. We could guess that the person who would be held accountable for her death was Addison. The type on the script was so large I could read it from Denver. One moment, Bizzy was angry and the next she had forgiven Addison, come to grips with her situation and was ready to move on and planned a lovely day with her daughter. But, being Bizzy, she killed herself. Not only did she do it, she left a note demanding that Addison not embarrass her by telling everyone how she died. Nice one, Bizzy. Mom of the Year to the very last second.

Addison deserved more, the viewers deserved more. More was deserved all around and it was not delivered. What we got was a failure of epic proportions. Two thumbs down. What do we have to look forward to next week? Oh, this will be great! Everyone wondering how Bizzy really died, Addison hurt and not wanting to betray her mother by telling the truth. I’ll keep my fingers crossed that Shonda dug herself out of the monstrosity of “Blind Love” with the next episode, “Home Again,” but somehow I’m expect more of a mess to clean.