I apologize for the delay in this week’s review. I was going to go ahead and skip it but finally got the opportunity to watch last night, and damn if it wasn’t worth talking about! If you care, I was at a Craig Ferguson comedy show on St. Paddy’s day. It definitely trumped Private Practice!

Addison came back to the office. Crying. Constantly. If she isn’t pregnant, I’ll eat my hat. Not that I have a hat. But if you have one, I’ll eat yours. Seriously, did anyone believe she was going to wrack up that kind of emotion over Bizzy? Not on your life. For goodness sakes, she basically found out that Sam and Naomi did SOMETHING and THAT didn’t bring her to tears. Those are not normal emotions. 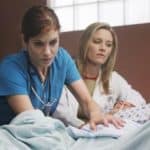 So, what do we know? We know Addison has been jonesing for a baby. We know that Sam doesn’t want more children. We know that Sam and Naomi did a little sumthin’ while Addy was at her MOM’S FUNERAL and we know that (spoiler alert!!) Naomi is leaving the show. What an absolute perfect time for Addison to get pregnant. So we can spend her entire pregnancy in a will they or won’t they be together scenario, with Sam only committing once he sees the perfect little face of his newborn baby. Story for an entire season! All I can say is that if Addy is pregnant, I hope she gets to be happy during her pregnancy, because she deserves it. As an aside, do you think Naomi will leave with Gabriel? Amazing that she hasn’t been without a man since the show started.

Do you know that there are only an estimated 30,000 people nationwide who have Huntington’s Disease? If we were to believe television, at least one of our friends will encounter someone who has to suffer the possible fate. Thankfully (although not for the families afflicted), it is mainly a hereditary disease. In spite of the face that the Huntington’s story is way overdone, I didn’t mind Amelia’s involvement. She is such a tough chick, and in her position my story would have probably played out the same. How do you tell someone you love they have a terminal disease, right after they tell you they will kill themselves if they find they have the gene? Ouch. Finding that out just as she was drawing blood left her in a no-win situation. The practice has a little bit of everything, and no shortage of people who have been through similar pain, as well as professional therapists, so Amelia lucked out and saved her friend, even by telling the truth.

Finally, I’m not really sure how I felt about the fertility case. I could understand every side they threw at us. Addison’s reaction in the end, when the parents didn’t want to see their baby even once, just solidified my thoughts that she is pregnant. She and Charlotte are usually all for the science of a procedure, and making the future a better place. But seeing the baby alone, without an ounce of love before undergoing a procedure proved too much for her. It fit perfectly.

After four seasons, I am still enjoying everything Private Practice. I daresay it continues to grow and get better. What do you think?