Last night’s season 6 premiere of Private Practice was certainly an interesting one.Â  Not only were questions from the season finale answered, but new and interesting changes were also brought about for the doctors of Seaside Health and Wellness.

One of the biggest changes for the how, perhaps, is the new method of storytelling we will be seeing in the, as of now, thirteen episode season.Â  It has been said that each episode this season will be told from a different character’s point of view, and last night’s premiere gave us a taste of how that is going to work.

Private Practice‘s premiere was broken up into six separate yet parallel segments, following one or two characters throughout the day, then finally the group as a whole.Â  At the beginning of each segment a brief montage of the characters” mornings played: smiling Sam, carrying a breakfast tray, Amelia receiving her one-year sobriety chip, the laughing Freedman family, Addison and Henry, Jake waking up, and Violet receiving a text. 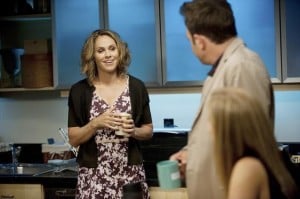 Violet
The episode focused first on Violet as she wakes to a text from Pete, ‘Went for a run. Whatever happens…know that I love you.’Â  The message first makes her smile, comforted that he cares, but then later becomes a cause for worry, as we know PeteÂ is supposed to be on trial for his mercy killing near the end of season 5. Yet, seeing as life doesn’t stop for a trial, Violet goes through the motions of getting ready for the day, comforting Lucas (who is one of the most adorable children on screen right now) and staunchly went to work, ignoring the questions from everyone else as to why she was there.Â  The drama heightens when Violet gets to Pete’s court date, only to find out that he hasn’t shown up, launching her into a panic that he’s run out on her….then she receives a mysterious phone call from the man himself….

Addison…& Jake
Finally we find out who Addison chose!Â  And the answer…Jake!

The morning for these two begins quietly, and almost eerily domestically, chatting in bed and playing with baby Henry (seriously, where does ABC find these adorable kids?), and Addison even tells Violet later in the day that she’s confident she made the right choice, and she’s really happy.Â  Isn’t it nice to see Addison happy?Â  In fact, Addison is so happy that when she meets Jake at the hospital, she’s a nervous, ranting woman in love, going on about how she acts differently with Jake, even comparing him to cancer…in a good way, if that’s possible. 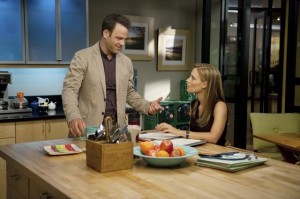 As far as a family morning is concerned, the Freedmans’ joking about — well, bad joking as far as Cooper isÂ concerned — is probably as normal as things will get for the trio.Â  Especially after Charlotte oh so flatly warns Coop that she might be pregnant, and she might miscarry due to her IUD.Â  After his question last season about possibly adding to their family, Charlotte’s dissatisfied reaction is not exactly what Cooper wants toÂ hear, and in true Cooper fashion, he spills the baby beans to Violet, despite promising Charlotte that he wouldn’t say a word.Â  Charlotte however, seems pleased that she’s likely to lose the pregnancy; yet, she ends up shocked at the ultrasound.Â 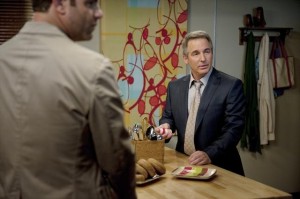 For an unlikely pair, it seems that Sheldon and Amelia have become great friends.Â  Sheldon is the one who presents Amelia with her one-year chip forÂ her sobriety, watching, proud, as she delivers a speech thanking her support group for saving her life.Â  He even later makes sure that she knows he’s not going to let her belittle her own accomplishments, to her return that he better live a long time so she can return the favor.Â  But seeing as I have been a loyal Private Practice fan since the beginning, I’m more than a little worried after Sam corners Sheldon about the results of his blood test.

Sam
Remember that smiling face Sam has on in the montage?Â  Clearly, it’s not for Addison.Â  But it is for Stephanie, a labor and delivery nurse at St. Ambrose whom he’s struck up a relationship with.Â  Sam seems to be very protective of this new facet in his life, keeping the information from his friends and co-workers, and telling Addison that he’s fine, after her turndown of his proposal.

Everyone
After focusing on each character, the Private Practice season 6 premiere culminated in a broader conclusion, featuring each character’s storyline equally.Â  And in typical Shonda Rhimes fashion, the episode’s ending was appropriately shocking.Â  What, with the news of Charlotte’s pregnancy with triplets, Pete’s heart attack — no, he didn’t run out on his family — and Jake’s declaration that he wants to move in with Addison, there are a multitude of new and challenging circumstances coming up for the show this season.Â  When Rhimes mentioned that the season would feature “a death, [and] some babies…” she was not padding the plot at all!

Overall, I found “Aftershock” to be a satisfying yet intriguing premiere. Â Questions from the season finale may have been answered, though now there are more to be dealt with. Â  The new method of storytelling gave interesting insights into each specific character’s emotions, and I’m definitely interested in seeing how that is utilized through the season. With the possibility that the upcoming 12 episodes will be the series’ last, it’ll be interesting to see what can possibly happen for Seaside Health and Wellness.

Did you watch Private Practice last night?Â  What did you think?