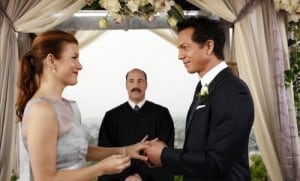 Last night myself and fans all over said ‘so long’ to Private Practice, and the series’ finale did its best to fulfill the needs of characters and fans, though not with out a twist or two.

With the simplest thread in the Grey’s spin-off’s closing, Amelia and James seemed to have moved past the conflict of weeks’ past, and with Amelia’s declaration of wanting to one day have babies with him, the two were quite obviously happy and in-love at the series’ end.Â  Clean and to the point, these two left us with a feeling of hope, and the almost too-sweet notion that they will reach the wedding stage one day.

Thankfully, we also got to see Sheldon stand up and fight for his love after Miranda’s cancer took the inevitable turn for the worse.Â  The two seemed blissful at Addison and Jake’s wedding, though still not telling the truth to Sheldon’s friends about their health.Â  But as we have seen throughout the season, Sheldon doesn’t give up so easily anymore.Â  When Miranda receives that painful diagnosis that she is running out of time quickly, she tried to push him away, insisting that he shouldn’t see her in those last days.Â  And though she walked out on him, he refuses to put up with it — showed up to declare his dedication, arguing to her, “You deserve to be loved until the very last moment, and I deserve the chance to love you.”Â  He’s convincing, and the two spent their last moments of the episode (and possibly the last of her life) sunning on a beach.

Remember Jake’s fight with his daughter Angela?Â  At the time it looked as if that was all we were going to see of their discontent, until Angela arrived to be Jake’s ‘best-man’ at the wedding.Â  But that’s not to say that everything was rosy with them, either.Â  The two battled it out again when Angela told her father that she wanted to take a semester off of school to spend in Europe with her 50 year-old boyfriend Eli, who would be teaching during that time.Â  Of course, Jake took this as her dropping out of college completely, and fought her on it.Â  Yet before the episode came to a close he had a change of heart, telling her that he would be proud to one-day walk her down the aisle to the man who most makes her happy, and if that man will be Eli, so be it, because she will always be his little girl.

Charlotte and Cooper’s time in the episode was spent trying to balance their professional lives and the demanding task of tending triplets, and by balancing I mean that Charlotte went back to work as usual, and as expected, and Cooper took the role of Mr. Mom.Â  And just as one would imagine it, raising triplets is not an easy task and Cooper began to crack.Â  He had to convince Charlotte that they did need a nanny unless she wanted him having sex with park moms simply because their schedules matched – a small nod to his previous reputation as somewhat of a man-wore.Â  The two must have figured everything out because by the end of the hour they were back to their usual passionate selves.

Perhaps the biggest twist of the episode lay in the fact that Audra McDonald didn’t return so Naomi could simply to be a bridesmaid — she and Sam ended up spending the night together after Addison’s wedding, and Nai managed to get pregnant.Â  She was hesitant to tell Sam however, still resentful over him ‘walking out’ on their marriage, but Addison did not agree.Â  In fact, she went to Sam, “72 percent” certain that she was doing the right thing, to basically tell him that Naomi was still in love with him.Â  As soon as it hit him that he could still be in love with her, too, he let Stephanie off the hook (sadly) and headed to New York to win back his woman — “…the only woman I have ever loved.”Â  Still in denial, Naomi accuses him of simply feeling obligated to the baby…that he didn’t know about.Â  The renewal of their romance, and second wedding, came as a surprise (at least to me), and was very fitting as the two were at odds over their divorce in the premiere episode of Private Practice.

The one final medical case for the practice was, in a sense, the audience.Â  Private Practice‘s finale saw Violet treating Holly, who much like the show’s more dedicated fans, was having a hard time saying goodbye after almost six years of weekly visits.Â  Though she got accepted to the Cordon Bleu in Paris, Holly was hesitant, afraid to leave, and Violet had to convince her that she would be okay without her.Â  Just before leaving, Holly turned back to thank Violet for saving her.

The episode opened on Addison, appropriately, making a video diary, presumably for herself.Â  She went on about Derek, how she was angry about the time they ruined, and about how over time, you don’t believe in fairytales anymore.Â  “But then there’s this man…” and we see, altogether too quickly, her wedding to Jake go off without a hitch.Â  The rest of the episode saw Addison trying to save Sam and Naomi’s relationship, which was an appropriate ending as the two gave her what she needed to have her life ‘now,’ by welcoming her into their practice.Â  In the end, the tape Addie had been recording was not for her, but for her friends in honor of their second wedding — and the second wedding of the episode.

When it comes to series finales there are always things to nit-pick, questions to ask, and laments to be had.Â  Of course I would have loved to see more of the children — there was minimal Mason-time, no Lucas or Henry, and Maya doesn’t show up to her parents’ second wedding?Â  And it would have been great for Addison and Amelia to have more substantial material, and for Cooper and Charlotte to have resolved their issues on-screen.Â  But what good would complaining accomplish now?

All things considered Private Practice‘s series finale did the job.Â  Everyone ended up with their own happy ending, and all of the doctors (even Naomi) reconvened in the practice’s kitchen at the end to hear about the completion of Violet’s new book.Â  The title?Â  “Private Practice.”Â  Sam remarks, “That title sucks,” prompting the bunch to playfully argue as the camera pulls out from its view in the elevator, and the doors close, only to be followed by a deflated heart version of the Shondaland card, complete with a halted roller coaster.

I was very satisfied with the conclusion of Private Practice.Â  What did you think?