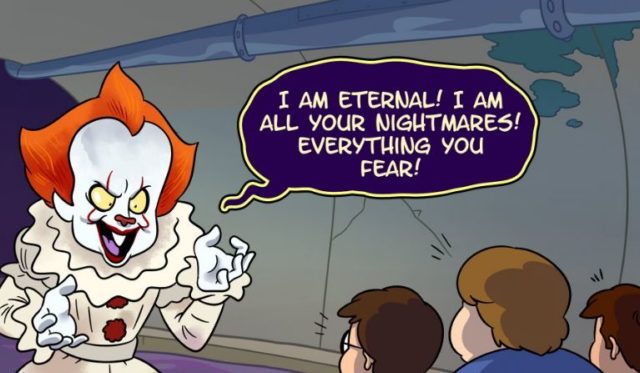 So far be it from me to knock one of the greatest horror films ever made, told, written, etc., but this comic does make a good and very hilarious point. You notice how we always seem to see Pennywise targeting mostly boys? Oh don’t read into that the wrong way, that’s not the point at all. But we get the implication of a young adolescent girl that he’s taken and of course he goes after Beverley. But there’s kind of an issue about terrorizing young adolescent boys that in some ways wouldn’t make a lot of sense when you apply such fears to IT.

For one thing, adolescent boys are still going through puberty. They’re starting to notice girls and they’re beginning to notice changes concerning their body that might frighten, excite, or even confuse them for the most part. The frightening part isn’t really the opposite sex, but their reaction to them if it ever gets noticed. A lot of young adolescent boys get so unbearably nervous around young girls that they can’t help but feel shame, embarrassment, and in some cases fear.

So go ahead and read the comic below and then I’ll explain….

Tum te tum tum tum. Oh, are you back? Okay then.

Notice how one of the boys started off the fear about a rather hot teacher? Then the other boys decided to run with the gag and make it into something that could be laughed off or highly anticipated as they waited to see if Pennywise would take the bait. Of course Pennywise falls for it the first time and becomes the gorgeous English teacher. Then Ben pipes up about a tight skirt. After that Pennywise gets the gag and splits, saying that he’ll them in another 27 years.

So yeah, in the movie this would have gone a lot differently but it’s funny still because no doubt Pennywise thought that Ms. Stevenson was next level hideous. But the real fear that young boys have when it comes to the opposite sex is the reaction that they have and that they’ll be discovered having those feelings in front of everyone else. It’s true that it leads to more embarrassment than fear, but the gag is funny enough to evoke a laugh.

After all, adolescent boys tend to have a lot of things on their mind but since it’s becoming something that they’ve started to think about at this age, sex and sexuality have by this point become a big part of their world and figuring it all out becomes kind of an obsession. They look and like it, but they don’t always know why they like it. The female body to an adolescent boy is something mysterious, wonderful, terrifying, and wonderful all over again most times, and it’s something they tend to desire but don’t know how to get.

With most adolescent boys Pennywise might actually have to work to get their attention off of women to actually scare them. As the comic shows that’s not always possible.