BBC’s latest adaptation of the beloved character Sherlock Holmes premieres on Sunday 25 July, 21:00 on BBC One. The show will air in the United States on PBS’ “Masterpiece,” though an exact date is unknown. 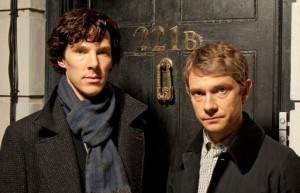 The iconic details from Conan Doyle’s original books remain — they live at the same address of 221b Baker Street, have the same names and, somewhere out there, Moriarty is waiting for them.

Steven Moffat says: “Conan Doyle’s stories were never about frock coats and gas light; they’re about brilliant detection, dreadful villains and blood-curdling crimes — and frankly, to hell with the crinoline. Other detectives have cases, Sherlock Holmes has adventures, and that’s what matters.”