Well, BBC America has treated us at long last to a glimpse at the new episode of Doctor Who. It’s the Christmas special, titled “A Christmas Carol,” and will feature Michael Gambon (Harry Potter‘s Dumbledore) along with Katherine Jenkins. Here’s the official press release for the episode: 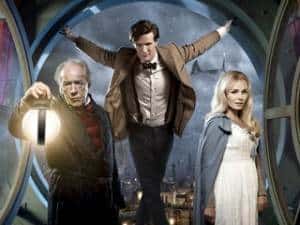 Amy and Rory are trapped on a crashing space liner, and the only way The Doctor can rescue them is to save the soul of a lonely old miser, in a festive edition of the time-travelling adventure, written by Steven Moffat. But is Kazran Sardick, the richest man in Sardicktown, beyond redemption? And what is lurking in the fogs of Christmas Eve?

Matt and Karen return for an all-new Christmas special, along with Arthur Darvill and guest stars Michael Gambon (Harry Potter) and Katherine Jenkins.

Lead Writer and Executive Producer, Steven Moffat, confirmed, ‘Oh, we’re going for broke with this one. It’s all your favorite Christmas movies at once, in an hour, with monsters. And the Doctor. And a honeymoon. And … oh, you’ll see. I’ve honestly never been so excited about writing anything!‘

The promo below is pretty creepy, but it’s also pretty cool. Michael Gambon is, as always, terrific, and Matt Smith gets more incredibly cool lines, like “I’m the Ghost of Christmas Past.” I mean, we all knew he was going to say it, but that doesn’t make it any less of a neat moment to hear him say it. The man spews trailer-made lines.