The CW premiering two new shows this year and one of them is Hellcats, a new college series about cheerleaders. I know, you’re thinking “Bring it On” and you’re not wrong, but the routines are pretty awesome and Matt Barr’s hair defies all laws of gravity. The network has released some promo photos for the upcoming series premiere, which is set to air on September 8. 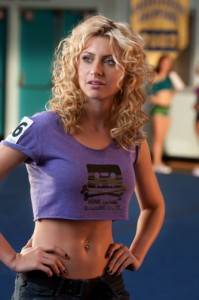 HELLCATS is a coming-of-age story about Marti Perkins, a young, pre-law student at Lancer University in Memphis, Tennessee. Marti is cool, hip and alt, but her world flips upside down, literally and figuratively, when she loses her scholarship, and realizes the only way she can stay in school is by reigniting her dormant teen gymnastic skills to win a place on Lancer’s legendary cheerleading team, The Hellcats.

Against her every instinct, Marti goes for it and makes the squad, and is thrust into a world of camaraderie, backstabbing and the intersection of sports, backroom academia and big money. Marti’s new roommate, Savannah Monroe, a petite, peppy Texan, is among the diverse cast of athletes, undergrads, family and friends, all set on the sprawling campus of a powerhouse college football program in the deep South. The series stars Aly Michalka as Marti Perkins, Ashley Tisdale as Savannah Monroe, Heather Hemmens as Alice Verdura, Robbie Jones as Lewis Flynn, Matt Barr as Dan Patch, with Sharon Leal as Vanessa Lodge and Gail O’Grady as Wanda Perkins.