The situation between the brothers come to what looks like a violent head in the October 29 new episode of Supernatural. If you missed the most recent episode “Live Free or Twi-hard”, you can read our review here. In the October 29 episode Dean reveals to Bobby that Sam allowed him to be turned into a vampire and then confronts his brother when the brothers stumble upon a truth curse. Sam may not respond, or he may not give Dean answers that he likes – but either way, there’s a Winchester boxing match coming our way.

Check out the promo below and then go take a look at the photos we previously posted for this episode. 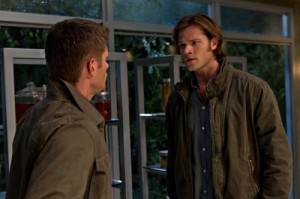 Sam (Jared Padalecki) and Dean (Jensen Ackles) investigate a series of suicides and discover the victims were being told brutal truths that drove them crazy. They find out someone is invoking the Goddess of Truth, Veritas, forcing people to be cruelly honest against their will and Dean is the next victim.