So, how about that season 6 premiere? Did you like it? If you missed it, you can read the review we just posted. But enough about that, we’re already looking ahead to next week’s brand new episode of Supernatural, set to air on October 1.

Dean will get sucked into a case with Sam next week and the boys will get saddled with a baby. Seems like a pretty solid set-up for a humorous episode. But then Grandpa steps in to cause some tension. Uh-oh! Plus, the return of skinwalkers/shapeshifters. Those guys have been part of some really great episodes – “Skin”, “Nightshifter” and “Monster Movie”.

You can view promo photos we previously posted for this episode and then you can check out a trailer for it below. While this episode opens with Dean still living with Ben and Lisa, we can only wonder how long it will be before he leaves them for the hunting life again. 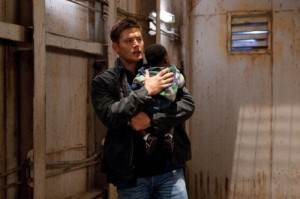 Sam (Jared Padalecki) investigates a case about missing babies whose parents are being murdered. At one of the crime scenes, he discovers a baby that was left behind and calls Dean (Jensen Ackles) for help. Reluctant to leave Lisa (guest star Cindy Sampson) and Ben (guest star Nicholas Elia), Dean finally agrees to meet Sam and surprises his brother with how parental he has become.

The brothers take the baby to Samuel (Mitch Pileggi), who decides to raise it as a hunter, which infuriates Dean. However, before they can decide the baby’s future, a shape-shifter breaks in and attempts to kidnap the baby.