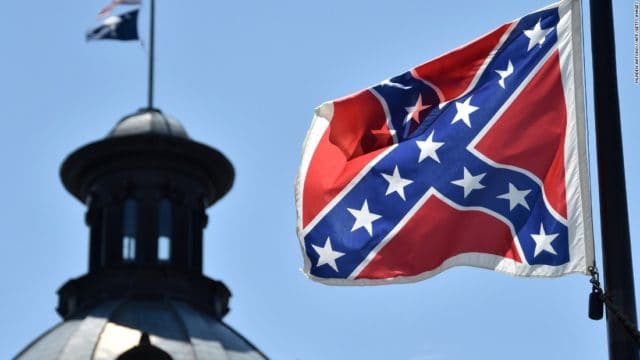 We don’t normally engage in local news broadcasts but when something has a chance to go national we have to bring it up.Â  Something tells me this clip from a local news broadcast in Charleston, SC will be making the rounds today.Â  Now I’ll say this.Â  Protesting is common.Â  In fact it’s becoming more common than ever.Â  People expressing their beliefs in a coordinated way to try to make change is a positive thing.Â  It’s part of democracy.

So when people are upset at the confederate flag and want to protest it, if done peacefully I’d say go ahead.Â  However, this is not one of those cases.Â  This clip is far from peaceful.Â  When you do an NFL style dive to rip out the confederate flag from people’s hands I’m not sure that’s considered a peaceful protest.Â  Especially when it ends up in violence.Â  Part of this is funny from the sheer dive but the other part is very dangerous.

The last thing we want is something like this escalating into a national incident.Â  You know, like a civil war?