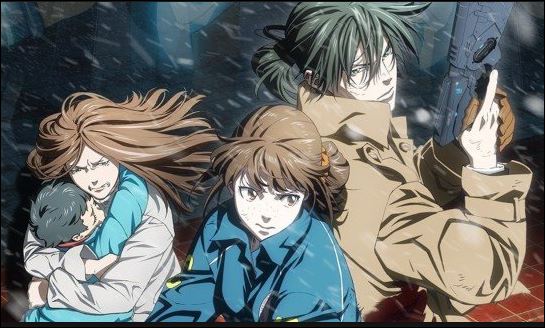 People with a taste for cyberpunk crime shows might remember Psycho-Pass, which is a Japanese franchise that started up with a very successful season of anime that was broadcast from October of 2012 to March of 2013. On the strength of that single season, the franchise has seen a number of subsequent expansions, which include a second season for the anime, a couple of animated movies, a couple of manga, a number of novels, and even a video game. As a result, the popularity of the Psycho-Pass franchise should be evident.

For those who are unfamiliar with the Psycho-Pass franchise, it has more than earned the right to be called a cyberpunk franchise. In short, it is setting in an dystopian Japan in which there are sensors mounted in public places for the purpose of scanning the minds and mentalities of the population to calculate their chances of committing a crime. This is the titular Psycho-Pass, which is very important to the franchise because when someone exceeds a certain threshold for the so-called Crime Coefficient, said individual is hunted down by police with the authorization to kill. Certain members of the police are called Enforcers, who are set apart by the fact that they have high Crime Coefficients of their own. As such, they are overseen by more police, who have the authorization to kill them if they turn into threats of their own. Unsurprisingly, much of the Psycho-Pass franchise is focused on those who are less than enthused by this system, though it should be mentioned that its protagonists are the ones responsible for enforcing it rather than the ones challenging it.

What Do We Know About the Third Season of Psycho-Pass?

Regardless, while the first and second seasons of the Psycho-Pass anime came out in 2012 and 2014, it should be mentioned that the Psycho-Pass franchise as a whole has been continuing on. For proof, look no further than the fact that the second movie was released in three parts in January, February, and March of 2019, which wouldn’t have been possible without considerable fan interest in the franchise. Due to this, it is perhaps unsurprising to learn that a third season of the Psycho-Pass anime is set to be released at some point in the future.

Currently, not much information has been released about the upcoming season of the anime. For example, we don’t actually know when the season will be coming out, not least because we don’t actually have a lot of indications for how much progress has been made upon it. Likewise, it should be mentioned that we don’t actually know how many episodes the third season will be getting, which is pretty important when the first season got 22 episodes while the second season got 11 episodes. With that said, what we do know is that the first season director Naoyoshi Shiotani is set to make a return as the director for the third season, while the manga artist Akira Amano will be making a return as the character designer as well.

What Are Some Hopes and Fears for the Third Season of Psycho-Pass?

For the most part, the news of a third season is meeting with a fair amount of enthusiasm from the Psycho-Pass fandom. However, it seems safe to say that there are a lot of people out there who are hoping that the third season will be following in the footsteps of the first season rather than the second season. This is because the second season is generally considered to be much inferior to its predecessor, which has been attributed to a number of issues.

First, the success of the first season was the product of a number of parties lining up at the same time. The studio wanted a sci-fi show of merit, while the creators were fired up to make a sci-fi show of merit. Even then, the show struggled because the team ran out of energy, which is why there was a notable dip in quality for episodes 17 and 18, which was when they had to outsource in order to do their best for the rest of the show. Unfortunately, the second season was handled by a different team that struggled to get the right mood for the show, which wasn’t helped by the fact that there were similar struggles among the writing team. As a result, there are likely to be a lot of people who have their fingers crossed in hopes that the third season won’t run into the same issues, which could very well doom its prospects.