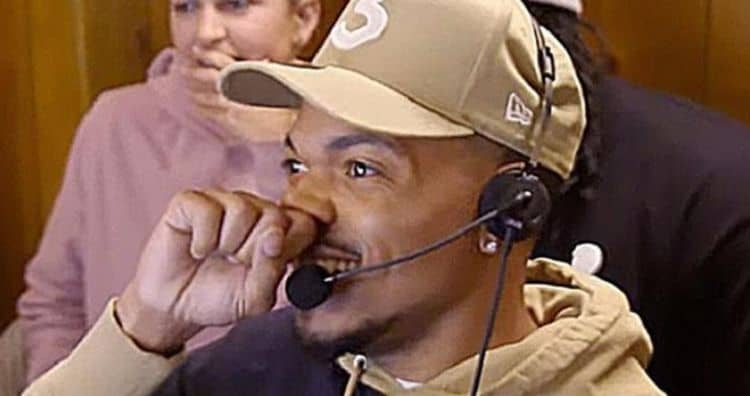 Punk’d is definitely one of those shows that makes some people cringe and others laugh since the pranks that are pulled sometimes tend to go a little too far and it’s likely that whoever had to suffer through the prank is ready to sue someone or knock them to the ground. Chance the Rapper is taking over the reboot of Punk’d on Quibi however and it will be airing this month as the show continues to target celebrities in ways that might not have been seen before and could very well lead to a few failures as happened in the past with former host Ashton Kutcher. It’s easy to think that anyone having to go through these pranks and be the butt of them is going to need a very big and loose sense of humor to come out the other side laughing or will have to debate whether or not they want their episode being aired since their reaction could be entirely wrong for TV and for the show. It’s happened more than once during the original run that celebrities didn’t react the way Kutcher had hoped or were simply not fooled by the act. These folks work around actors for a living though, so it usually takes something extraordinary to really dupe them, and in some cases the cast that Kutcher put together just didn’t work out.

Punk’d isn’t out to cause massive damage or emotional turmoil however, even if that’s what tends to happen from time to time since there are people that just can’t take a joke or folks that don’t happen to find the stunts funny. It is a show that requires a pretty massive sense of humor to take since some of the stuff they do is insane and almost on the same level a Jackass, though they’re not trying to be as destructive or controversial, at least not in theory. With Chance the Rapper at the helm this time it’s bound to be seen that the stunts will be at least a little different and possibly even more intense going by the trailer above since property damage is a very serious thing with a lot of people and unlike the stunts that occurred in the days with Kutcher as the host, some folks might actually get completely bent out of shape. Matthew Strauss of Pitchfork has a bit more to say on this topic. Such a thing does tend to happen when you look at what used to be your vehicle or property and find that it’s been somehow destroyed or damaged beyond belief. Hopefully the show will be just as on point as the original and people will be able to get into it as much as before, but at this point in time it’s hard to say whether this is going to be seen as equally funny when compared to the original show or if it’s going to fall flat and not attract as many individuals as before.

The initial reaction to Punk’d does kind of depend on who’s watching as older individuals might tend to react in a manner that displays more shock than humor considering that the show does tend to damage a few things now and again and showcase situations that could be said to be dangerous. Thankfully most everything is accounted for and there’s not a lot of chance that something bad is going to happen since the liability for any unwanted damages or harm to anyone could be massive. But for those that are younger, perhaps in their mid-twenties or younger, it’s bound to be seen as humorous once the nature of the show is presented, or perhaps even before. Of course, to say everyone is going to watch the show and have the same reaction as per their age group is an over-generalization, but on average it is seen that those who are younger tend to find humor in a lot of happenings that those from an older generation might find kind of appalling. Admit it, when a lot of us were a good deal younger there were things we laughed at that made our parents and grandparents drop their jaws in shock. Punk’d is pretty much like that as it introduces actions and pranks that might make some of us remember back to the days when we thought this stuff was so funny, before we realized the overall cost of the items that were being destroyed or the reactions of the people that were watching it happen.

All in all it’s supposed to be a fun show that isn’t really for everyone but should at least have a solid entertainment value for those that are willing to watch and laugh. The pranks aren’t meant to harm anyone but they are supposed to take people off guard. Likely as not there will be pranks that don’t air either because the person being pranked won’t sign off on it or they didn’t go right, as happened in the original show. Lindsay Dolak of InStyle has a list of pranks that were considered the best from the original show, just in case readers want an idea of what’s coming.