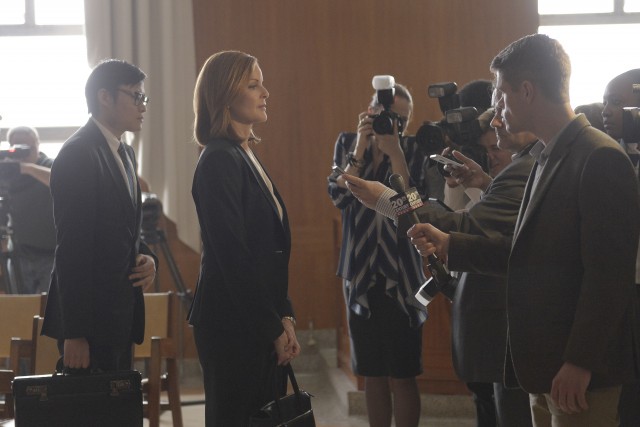 At long last,Â Quantico has finally returned from its winter hiatus. The mid-season finale had some big reveals and cliffhanger moments, so let’s jump right in and see what happened in tonight’s spring premiere, “Alex.”

The episode opens with Alex, post-bombing, testifying before the Senate about Elias. She’s working to convince the world that he was simply the scapegoat, but she’s finding it difficult to convince those that are most important, such as Caleb’s mother Claire (played by Marcia Cross), the Democratic nominee for Vice President. We got a little taste of Claire at the end of the first half ofÂ Quantico‘s first season, but it looks like she’s going to start a major arc on the show now, something that I’m looking forward to. Marcia Cross is an incredibly talented actress, andÂ Quantico should benefit greatly from her presence on the show.

In the “past,” the cadets are beginning the next part of their training, and that includes having to face off in an “exam” with a class at a more advanced level than they are, and the losing class will be forced to say goodbye to some of their own. The classes, surprisingly, end up tied at the end of the experiment, so they are set to compete in a hostage scenario in order to determine a winner. Things in the test don’t go quite as planned, though, and the result is that the two classes will be combined for their training from now on, effectively giving us a whole new group of people to explore and get to know on the show.

Continuing on from the evolution around the mid-season finale, “Alex” gives a lot of weight to the post-bombing timeline, providing a more equal footing for both ofÂ Quantico‘s timelines. This works exceptionally well here, especially now that there have been so many changes in both stories. I don’t want to say that it’s like a new show (because it definitely isn’t), but there’s definitely a slightly different feel now that, in the past, the cadets have advanced to the next stage of their training, and, in the future, the manhunt for Alex is over.

“Alex” effectively reset enough ofÂ Quantico to make it feel new again, and it’s almost as if this half-season is going to be a new season altogether. The changes that have been put into place in both timelines should prove enough to give ample opportunity for progression, and I’m really looking forward to seeing where things go from here. The cast ofÂ Quantico is just as great as ever, and it remains the single best aspect of the show. The story itself has become much more interesting lately, though, and it’s nice that there’s so much strong material for the cast to play off of.

What did you think about the mid-season premiere ofÂ Quantico? Are you still hooked by this show after the hiatus? Let us know your thoughts in the comments down below!