Home
Movies
Question of the Day: Should Wonder Woman Have Hairy Armpits? 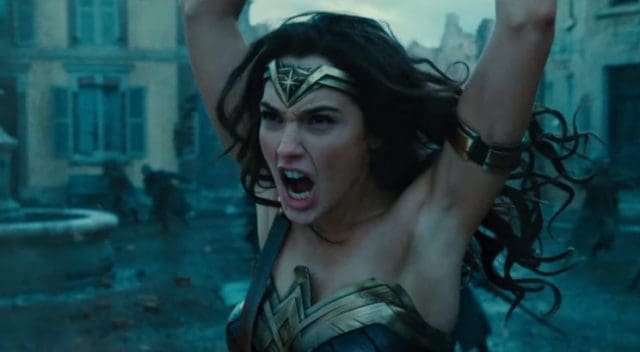 While there’s been plenty of analysis and speculation on the release of Wonder Woman, a new topic about the film has picked up quite a bit of speed over the last 24 hours.Â  It’s a topic that I didn’t think would come up but this is the internet for you.Â Â Â  Given that Wonder Woman is dwelling in the deepest Amazon in a seemingly exclusively female community, perhaps depilation would not be top priority?Â  So the question is whether or not Wonder Woman should have underarm hair.

The question’s actually more interesting than you might think.Â  As it turns out many are speculating that in one particular scene (the photo above) that Gal Gadot’s armpits were “digitally bleached” and that the image was tampered with.Â Â  “It seems like an enormous waste of effort to recolor the underarms of Wonder Woman herself for a split-second scene, especially when the obvious editing is much more conspicuous than the unaltered lady pits alone could ever be,” writes Marissa Martinelli of Slate.

Writes Shannon Carlin on Refinery29: “It’s really hard to believe that Wonder Woman, who has been on an island filled with strong women her entire life is worried about waxing and then bleaching her pits to make sure there isn’t a hair left on those babies. That is a time-consuming process and she’s a little too busy training ’10 times harder’ with the Amazons so that she can, you know, save the world. It really all comes down to priorities and I’d like to think shaving is pretty low on the list, even if it’s high on the studio’s. With Wonder Woman standing in as an example of female strength, it would have been exciting to see her with a little hair under her arms. To prove that women – even those who are superheroes – don’t have to cater to beauty standards that are meant to make them more attractive to men.”

When it came to the internet reaction, many on Twitter felt the same way.Â  Perhaps the studios could have gone a bit more “natural.”Â  I find it interesting that the argument’s been about armpit hair when her uniform looks like something that could be developed in the year 2017 or beyond.Â  It’s not just Gadot’s underarms that don’t represent her era or environment.Â  Look at her face.Â  Look at her hair.Â Â  Look at her boots.Â  This is not the representation of a true Amazon woman, nor should it be.Â  She’s a superhero!

This is a movie folks.Â  If you want to see women with underarm hair, watch a documentary or read a book.Â  I mean, come on.