Let’s face it; we are all a bit dirty in our day to day life. We forget to throw things away, we walk through dirt, and we hardly ever wash our hands before eating. The Chance family on the other hand made it their mission to keep their home clean to protect Hope. With cleaning everything top to bottom, the Chance’s expected to rid their home of all germs once and for all. Only problem is that Maw Maw seems to be the so called distributor of germs and that leads to some serious comedy this week on Raising Hope.

This week the main story was split into what I like to call an onion story. That is, as you peel back another part of the story, you get a rather smaller part of the story. This week started out with Jimmy wanting to be a good father by taping everything that Hope does while she is a baby. Most families do this and get great memories and moments captured on film but, in the Chance house a video camera only captures wild stunts. I thought it was interesting that the writers made it so all the memories of Hope were not filmed due to the childlike actions of Burt and Virginia. While this show is based around baby Hope, we got more Burt action this week than we ever have. Kudos to Garret Dillahunt for his great portrayal of Burt as it seems every week he pulls out the best comedic scene.

The next layer of the story really seemed to take a bulk of the episode. With Sabrina pointing out all the germs that are in the Chance’s home, Jimmy and the family goes into overdrive to give Hope a super clean environment for her to grow up in. It was great to see the 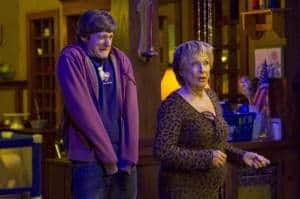 Chance’s working together for a common goal but, what I really enjoyed was the scenes with the black light. When Burt’s fingers glowed blue I was waiting for a great explanation and the writers gave what I believe was the best explanation for Burt. And it’s true, different ones reach different places. While that was a quick bit of humor, the second scene with the black light was much better. Showing Maw Maw as just a glowing mess was hilarious and having her pass her germy glow to others was great. Then, the editors did a great job with the Matrix like cough glow from Maw Maw to Jimmy. It was weird laughing so hard while being disgusted by the sight of what had happened.

Finally, the final layer of this onion is the quick scene of Virginia watching her old home movies. Even with all the humor this show brings every week, it was nice to see a scene that had such emotion that even I almost cried. We don’t get many scenes with Virginia front and center but, this week shows that maybe we should. Martha Plimpton did an amazing job invoking such somber emotions that you can’t help but feel sorry for her. The writers really got it right this week with balancing the humor and sadness.

Raising Hope continues to amaze and keep my attention week in and week out. It will be nice to see how Raising Hope finishes out in the next and final 2 episodes of the season but for now, it’s great to soak in all the comedic moments of this week’s episode. A+

Moments of the Week

“Thou Shall Not Lie. It’s like one of the Declarations of Independence” – Burt to Jimmy