Grudges can cause a lot of problems for those involved. It can cause friends to become enemies and can even tear apart families. A major grudge can even cause a family member to lie about another just to stay on top. When Virginia’s cousin Delilah (guest star Amy Sedaris) comes into town to get her half of Maw Maw’s inheritance, the family does all they can to make sure they keep the home and Maw Maw safe. Filled with a crazy goose chase, pharmaceutical drugs, and and a campfire in the living room, Raising Hope attempts to keep fans laughing but, does it work? Strap a boot on your head and read on to find out.

The main story this week was quite unique. Delilah and Virginia have been feuding cousins since they were children growing up. We can see the Virginia is some what envious and jealous of Delilah, as she was able to afford nice clothes and have “fancy” jobs. However, Virginia was able to get the big prize as she was the one who dated, and subsequently married Burt after a trip to the lake. This jumping off point really let the viewers see how much grudge between the two women has grown. However, after the origin story told by Virginia, the rest of the story fell flat. While Sedaris did a great job as the semi crazy cousin, I felt no connection to the story at all and at times wished it would just end. Burt, while being the focal point of the grudge, had little humorous moments and was poorly utilized this week. If not for the great return of Maw Maw at the end, this story would not have stuck in my mind.

That being said, the side story this week was fantastic. Since Delilah believes Maw Maw is dead, Jimmy must spend the day watching Maw Maw at the 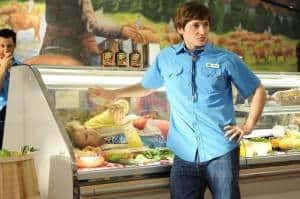 grocery store. Right from the get-go, I could tell that nothing but comedy could come from this. When Sabrina had Maw Maw placed as a greeter for the store, it provided us viewers with some great one liners by Maw Maw (see below for whole list of “greetings”). From here, Maw Maw just got into more crazy shenanigans and really let Cloris Leachman shine as an actor. Seeing the 84 year old stuffed in a deli case, driving a moped, and roller blading really showed me that, just because you’re old, it doesn’t mean you still can’t have fun acting. Aside from the extreme actions of Maw Maw, we got some more mind flashbacks as Maw Maw believed for awhile that Burt was now her husband Wilfred. The exchange between Jimmy and Burt at the beginning of the episode was a great moment. Sadly for them, I don’t think that kind of stuff happens to other people at night in their homes.

It’s been a great first season for Raising Hope so far but, with this shaky episode, I now see that not every episode can be pure gold. It holds well during the shows season but, as a stand alone episode it would fall. B+

Moments of the Week

“Do you think this kind of stuff happens to other people in the middle of the night and their too embarrassed to talk about it?” “I hope so.” – Burt and Jimmy, after Maw Maw chased Burt out of bed thinking he is her husband.

*Correction* – Last week I stated that Raising Hope was almost finished this season. However that is not the case as Raising Hope has been slated to air 22 full episodes this season. Special thanks to Brian Basquille for pointing this out.