For every guy out there, there is one place that you never mess with. I really don’t have to say it because any guy who is reading this knows exactly the place I am talking about. Well, this week on Raising Hope, Burt had to do the somewhat unthinkable action and get a vasectomy. While this isn’t usually a laughing matter, Raising Hope was able to pull out the funny and take a memorable doctors visit and turn it into a heartfelt connection between Jimmy and Burt.

Like I said before, Burt was chosen to get a vasectomy per the Chance family requests. This all stemmed from a belief that Virginia was pregnant with another child (more on Virginia later). While Burt usually is given plenty of screen time on RH, this week devoted almost the entire episode to the Chance patriarch. From beginning to end, the writers were able to craft a hilarious standalone episode that showed off the talents of all the actors, and pushed Garret Dillahunt to his best comedic moments since his boat name rant in episode 1.03 “Dream Hoarders”. The story itself was also a great piece. With most of the story taking place at the 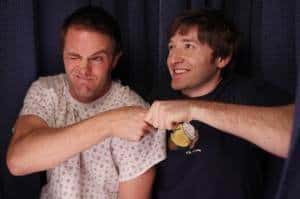 doctor’s office, I was a little leery that the story would buckle due to lack of freedom in terms of movement. Well, I was wrong about that. Doctor Burwitz (guest Sam McMurray) was a great addition this week and through his use of roofies, we were shown a great father/son montage. I never realized that fart jokes could really bring a father and son together or better yet, that a single fart joke can create a strong friendship between father and son. It was amazing to see RH take a hilarious situation and bring forth a touching moment between Jimmy and Burt.

Now, back to Virginia and her side story. With the pregnancy scare that started off the episode, we the viewers were given a look at blackmail thanks to Sabrina. Having the two women run into each other while at the clinic for pregnancy testing, was nothing new for a sitcom but, what followed is what set the episode apart from the other sitcoms. It was funny to see Virginia struggle to keep the secret she has on Sabrina because she made such a ridiculous face that you knew she had something to say and because the way she handled the whole situation mirrored so closely how some people act in the same situation. Seeing both women battle the fact they both knew a secret about the other was great but, seeing them form a true friendship was better. It would only be better if Sabrina and Jimmy can end up together, making one happy and crazy family.

This week brought us yet another My Name Is Earl guest star. This time it was in the form of a Gas Man/Arcade Worker named Tyler (Eddie Steeples or Crabman for you MNIE fans). It was nice seeing Steeples in another acting role and he did great as the kooky and somewhat Crabman-like character Tyler. With this being the 3rd MNIE actor to appear on Raising Hope (both shows are after all produced by Greg Garcia), I wouldn’t be surprised to see Ethan Suplee or Jaime Pressly appear in a future episodes.

With making a vasectomy a laughing matter, Raising Hope has raised the bar once again for funny sitcoms. This week had everything that was needed to create a great half hour of humor, touching moments, and most importantly multiple fart jokes that bridge a relationship. A+