Money will make a person do somethings they aren’t proud of, and boy did we learn that in last nights Raising Hope. When the Chance’s find out that Sabrina’s (Shannon Woodward) family is loaded with cash, everyone begins to act just a little bit crazier. Shoot, even Maw Maw (Cloris Leachman) gets a little bit nuttier (but more on that in a minute). Does as of this translate into huge laughs or, are the writers laughing their way to the bank with this episode? Continue reading to find out. 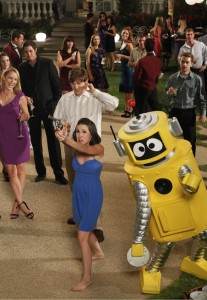 Every sitcom seems to have an episode like this. The main family fins out another character belongs to a wealthy family. Raising Hope however, did this story in such a good fashion that I didn’t mind that the story premise has been over used. Seeing the family change a bit when they found out about Sabrina’s family money was great from beginning to end. Of course, everyone reacted different to the news, and that made for some hilarious moments throughout out the show. You have Virginia (Martha Plimpton) going crazy over a toilet, Burt (Garret Dillahunt) trying to please his wife with lobster, Jimmy (Lucas Neff) wanting to have Hope rub elbows with rich babies, and Maw Maw wanting to use the new toilet more than normal. Having every character participate in the story this week really made the episode whole.

While the story of Sabrina and her family’s money was at the center of attention, the side story this week really stood out. After visiting the home of Sabrina’s Dad Cap (Guest star Stephen Root), the Chance’s receive a brand new toilet flown over from Japan. This toilet is amazing as it includes a bidet, hind end blow dryer, fancy electronics, and it sat next to Barry Bonds on the plane ride over. The toilet eventuallybecame a new favorite for Virgina. While not many people would think a toilet can cause rifts in a marriage, this week showed that it can. With Burt becoming jealous of a toilet, it became clear that the writers will throw anything in to make the viewers laugh as Burt tries to make himself number one in his wifes eyes. All in all, the side story was good enough that itself could have been made into a whole episode.

This week, we were introduced to Sabrina’s father Cap. The character was played by guest star Stephen Root and I have to say, I couldn’t think of anyone better to play the part. Root is no stranger to television as he has guested on shows such as; Blossom, Grounded for Life, and The West Wing and held starring cast roles in Newsradio and King of the Hill. His portrayal of the money centric Cap was well-played and for a while, I wished I was his own kin (just so I could see Yo Gabba Gabba live in my living room). It would be great to see this character make another visit on the show some time in the near future.

With all that went on this week, it would be a shame to not put up a list of some of the 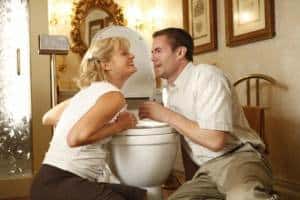 more hilarious moments. So here you go Raising Hope fans, here is what I though was funny this week.

Quips and Quotes
– Burt taking almost the entire opening scene to figure out that Sabrina is rich.
– Maw Maw eating plastic fruit because it was on the floor.
– “Is it too much to ask the kid to keep her toy food off the floor? How am I supposed to tell what’s real food and what’s fake?” – Maw Maw after eating a plastic apple
– “If they serve filet mignon, then don’t ask for ketchup ask for steak sauce” Virginia telling Jimmy how to act at the party
– “Lobster doesn’t grow on trees, I think. Who knows what goes on under the sea.” Virginia trying to lick cocktail sauce off her shirt
– ‘Boom, Boom, Bam, Badonkadonk” Sabrina point out all the plastic surgery a friend has gotten

Well folks there ya have it. This week proves that Raising Hope is shaping up to have another great season. One can only hope that the episodes continue to be as funny as this one. A+

So what did all you viewers think? Still in love with Raising Hope or did you not like this weeks episode? Be sure to sound off in our comment section below or in the Raising Hope forum section here. 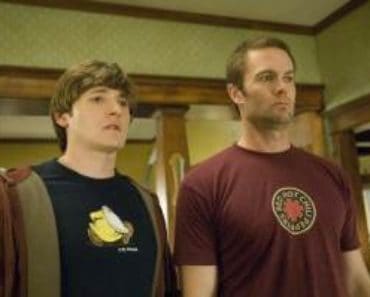