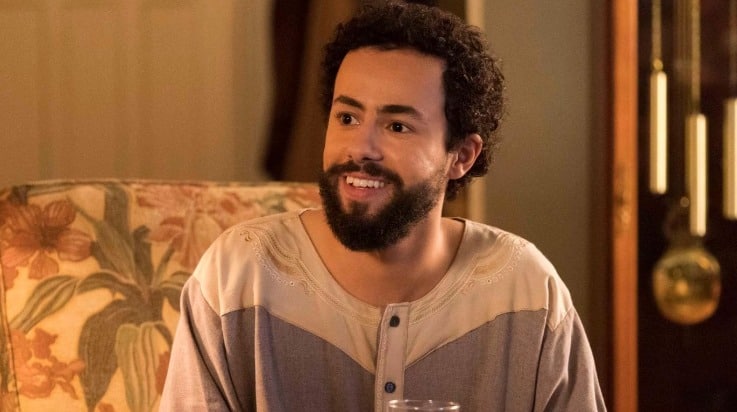 Hopefully, you know who the brilliant and funny Ramy Youssef is already. Fans know and love his hilarious comedy. For those of you who are less familiar with his work have plenty of time to catch up. You’ll find him riffing on the president, talking about what it means to be a young Muslim in a country where that’s demonized or working on his show “Ramy,” which is one of the first on American Public TV to feature Muslims.

Let’s begin with the obvious. Fans always want to know ‘where’ someone comes from even when it’s just down the street or, as the case may be, Queens. Ramy is, in fact, from Queens and was raised in New Jersey. For those wondering where he got those eyes and the great curly hair, his heritage is Egyptian. Also, as you may have guessed, he’s a practicing Muslim. He shares his take on struggling with faith as a millennial and his unwavering love of god in a very humorous and open manner.

Ramy worked as a camp counselor while he was in school in New Jersey. He collaborated with the Rotary Youth Leadership Awards (RYLA) program. If you’re not familiar with this outstanding educational leadership group, you should be. They work to teach young people aged 14-30 dynamic leadership skills. Events can be as short as a day or longer than a week and typically include teambuilding, communication, and other real-world applicable skills training.

Like so many great actors, Ramy Youssef didn’t start out with a grand design that involved Hollywood. He actually began his adult education at Rutgers, the State University of New Jersey. Initially, Ramy was a student of economics and political science. While he was in college, he did comedy performances. At the age of 20, he decided to leave Rutgers. He moved across the country to Hollywood and switched to acting school.

Being a ‘trailblazer,’ first in your given field who works in a new subject, like being a Muslim in America, comes with an obvious downside. There’s a lot of pressure to get everything ‘right,’ and make sure you include every nuance and essential aspect of the subject covered. With just ten episodes, there’s simply no way to do it all, but Ramy is up to the challenge and has done everything he can to include as much heart and content as he could fit in such a short span. He often talks about the challenges of the show, and how much serious reflection he has had to put into what he’s portraying.

5. Entertainment Weekly Wants Him to Win a Grammy

Just as the article by Darren Franich says, there’s a plethora of absolutely brilliant talent available right now from Hollywood and other TV venues. However, there’s something extraordinary about Ramy. Lots of shows are funny and honest and challenging social norms, but none have tackled life as a millennial child of immigrants from a Muslim background. The subject has been ignored just as the people have been cast as the villains here in the USA. In reality, they are our neighbors and friends. Muslims are as much a part of American life as any other group in this astounding melting pot of cultures. We know it’s been said, but the diversity here is what makes America great. Ramy fearlessly shows a whole suppressed culture within our own that hasn’t seen the light until now, and it’s wonderful.

6. Playing Himself On TV

The set of Ramy is a mockup of his childhood home. Real family pictures and other touches that are all inspired by Ramy Youssef’s life are used to bring authenticity to the show. Of course, what really brings the reality to ‘Ramy’ is Ramy. Though he plays a different character on TV than he does in life, they aren’t far apart. The show’s characters play so true because they could be real people. From his sister who deals with being repressed within her own home, to the parents, who are different versions of his own family, they could all be from a slightly alternate reality, and one not far from here. Playing a satirized version of yourself on TV is a challenge for sure, but one Ramy Youssef manages with the same smile and good humor as he handles everything else. It’s refreshing and delightful to watch him work.

Ramy introduces “Allah Cart” to the mainstream in an emotionally raw and yet surprisingly gentle manner. Bringing attention to the commonalities between young people’s approach to religion with picking and choosing what they want to observe isn’t the most popular subject. The humorous name “Allah Carte,” is an apt description of what many or perhaps even most people, not just Muslims, do with their religious choices. After all, when was the last time you met a Christian who believes shrimp are n abomination? While older generations always frown on divergent thinking in youth, it’s a common part of human experience. In fact, it helps drive social and religious evolution.

Being a young ethnic actor has enough challenges without being told you’re not “Ethnic enough” to play your own culture. Ramy had a great deal of trouble getting cast in Hollywood. Just as Asian women are often portrayed as either prostitutes or shy, quiet and underappreciated geniuses whose parents drive them to excel but never fully accept them even when they do, a young Muslim man has limited casting choices. Generally, he is either the ‘ethnic friend,’ which almost universally means having a heavy accent and darker skin, or else he is cast as a terrorist, which also requires a heavy accent and darker skin. The paler ethnic peoples get lumped in as ‘white,’ and discounted. For Ramy, the solution was obvious, bring this into the light.

For all that, both Ramy and his show are charming, funny, and engaging; there is a deeper aspect to his personality both on and off the screen. The profoundly philosophical, almost poetic nature that you can see in Ramy Youssef is part of what allows him to show the best side of what it is to be young and searching for an identity in a sea of stereotypes and misconceptions.

One of the more intriguing aspects of the show Ramy is that it has so many female staff members. Ramy and his co-creators insisted on this because they wanted to create authentic female characters. While some fans complain that his relationships with women are inadequate, and his portrayals of Muslim women are less dimensional than they want to see, there were a whole lot of women involved in making those decisions for the scenes. He hired mostly women to work on the show behind the scenes. He says that while he knows you can’t show everything in one short run show, he’s 100% behind the idea of doing a spinoff that stars a woman (perhaps his sister from the show).

If you’re watching Ramy and you haven’t yet heard, then we have great news, the show is getting a second season. If you’re not watching yet, then we have great news for you too. You can catch up on the first season before the 2020 debut of the next season without fear of spoilers. Either way, you need to know who Ramy Youssef is, and hopefully, we’ve given you plenty of insights to think about with our ten facts about him and his show. When you’re ready to drop your preconceived notions and experience some outstanding up-and-coming TV, then you can find it on Hulu, Amazon, YouTube, Google Play, and Vudu easily. There’s just no excuse to miss this genius, raw and humorous look at life here for young Muslims thanks to Ramy Youssef.