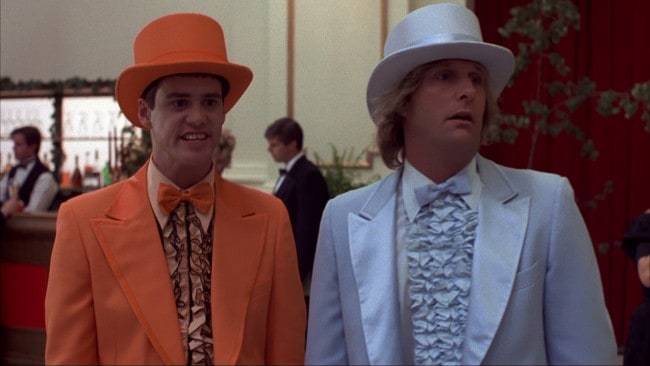 No offense to Kevin Lawlor of Coming Soon and anyone else that ranks the Farrelly brothers’ movies based on box office numbers and fan approval, but everyone has their own opinion when ranking the all-time great movies that the brothers have directed. There’s been a good bit of humor in most of them, but there are a select few that really made a lot of people roar with laughter given that they were so over the top, immature, and set to make a person’s sides ache from laughing so hard. The kind of movie that can make a person actually cry and hold their jaw since it’s beginning to ache is the type that a lot of people might be wise to watch these days just to get the tension out of their body and remember that humor is a balm to just about anything. Their movies might be a bit juvenile at times but that’s a big part of why we love them and why they’re so important. Some of their movies definitely cross a few lines that people might argue weren’t meant to be crossed, but those same people are bound to watch the movies all the same for their own reasons.

Here are the best Farrelly brothers movies of all time, in my opinion.

Jim Carrey does show up a couple of times on this list, but it has more to do with the fact that his movies back in the day were still pretty funny when he was cutting loose and just being the funny man and not the activist. Lately he’s definitely been doing both with equal fervor and it appears to work for him. This movie was absolutely nuts since poor Charlie suffered a mental breakdown to start with after “Hank” his alter ego, finally forced his way out and made a huge mess of Charlie’s life, working out the repressed feelings that had been building since Charlie’s wife cheated on him, left him, AND left their children in his care. Yeah, that might push a lot of people over the edge.

One has to wonder if this idea has actually been implemented in real life or if it’s just something that the brothers heard about and decided to implement in this nutty movie. When two husbands are given a ‘hall pass’ by their wives after misbehaving during a visit to a friends home they discover just how hard it is to really date someone or even find a one-night hook-up these days, as after marriage something happens to a lot of people who are so dedicated to their spouse that makes it almost impossible to attract someone any longer. While it’s kind of a sad bit of commentary on what marriage can do to a person, it’s also a funny look into just what might happen to a lot of us once we tie the knot and have been married for so long.

This might feel like an odd entry since it was never that big of a hit, but it’s still a movie that showcases a few celebrities in a way that we haven’t seen them before, and it does a great job of just being absolutely absurd the whole way through. Roy Munson is a former bowling champion who lost his hand after betting on a game that was less than legal, and his life is going pretty much nowhere until he meets up with a young Amish man, Ishmael, who has a natural talent for bowling. What starts out as a scheme to make money and for Roy to gain a bit of momentum moving forward turns into an adventure that eventually winds up saving Ishmael’s family farm and proving a bit redemptive for Roy.

Harry and Lloyd have become pretty big as pop culture icons largely because they’re just that dumb and yet they’re still capable of moving forward in the world somehow, albeit at the expense of others as they make their way along. When Harry intercepts a briefcase filled with money that was meant as a ransom, he and Lloyd make their way to Aspen to try and return the briefcase to Mary, the woman with whom Lloyd is smitten and the one that left the ransom in the first place. How they survive throughout the movie is kind of hard to imagine, but that’s what movie writers are for, to spin their magic.

1. There’s Something About Mary

If you’ve watched this movie then you know that there are a couple of scenes that are bound to stand out, the zipper incident and the ‘hair gel’ moment that have been big topics of discussion concerning this movie for years. Come on, how hard did guys wince when the sound of that zipper going up made its way through the theater? Even mentioning it at the moment kind of makes you wince if you’re a guy.

Those are my picks for the Farrelly brothers’ best of all-time, I’d love to hear more ideas of what should be at the top spot.