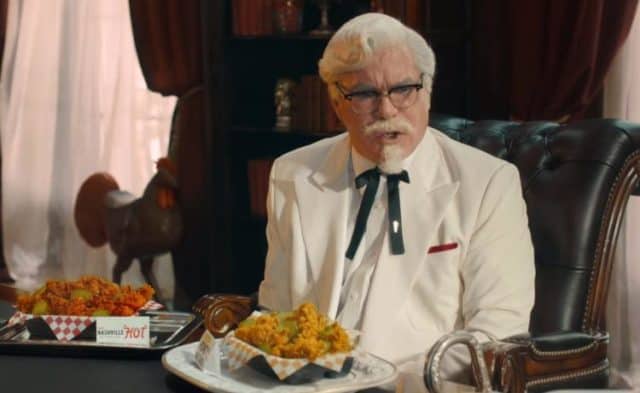 It is rapidly approaching a century since Colonel Harland Sanders founded Kentucky Fried Chicken way back in 1930, and the brand has definitely evolved since its inception. One thing that has remained constant with the KFC brand is the image of Col. Sanders. After the death of the Col. The brand executives decided to keep his image as the focal point and find actors and impersonators who shared the likeness of the beloved Col. Sanders and use them to promote and advance the brand. To this point, that strategy has worked out extremely well.

There have been some notable actors who have taken on the role of Colonel Sanders of the years, including Darrel Hammond, Billy Zane, Rob Riggle, and most recently, George Hamilton. Well, you can now add Ray Liotta to the famed list of Colonel Sanders replicas.

Much along the lines of a George Hamilton, Liotta has a unique presence that will allow him to imprint his version of the Colonel into the minds of commercial viewers with ease. The original ad appearances will have Liotta starring in a commercial in which he will be forced to choose between the Georgia Gold honey mustard BBQ chicken and the smokey Nashville Hot Chicken, which can either be purchased as a sandwich or as chicken tenders.

The commercial’s dynamic is centered on the fact that the Colonel finds it extremely difficult to determine which of these recipes is his favorite.

Liotta admits that while it is a short commercial, the role is challenging, because of the dual roles he will be taking on. Attempting to present the dual personas of the late Colonel will not be easy, but this is why KFC reached out to a season and highly decorated actor like Ray Liotta. They are simply looking for a family face to cover with makeup, they are looking for someone who has the professionalism to take this role seriously and the skills necessary to produce the desired results. Ray Liotta has both.

You would never imagine that something as seemingly simple as shooting a fast food commercial would require such depth; however, ads and commercials are one of the strongest ways for a company to build its brand, so every ad and TV spot is a representation of the company’s message and mission. Now, ask yourself if you would want to entrust your company’s brand message to an amateur or a rookie.

In addition to the names mentioned above, the late Colonel has also been portrayed by the likes of Rob Lowe, Jim Gaffigan, and Norm McDonald, each of whom brought their own unique personality and acting style to the table — adding another layer to the growing persona of the late Colonel. While the jury is still out on how well Ray Liotta will do in comparison to the other actors, I can assure you that no one is betting against him. It is likely that KFC has hit another home run in choosing the right actor to carry on the legacy (at least in image) of the late founder of the company.