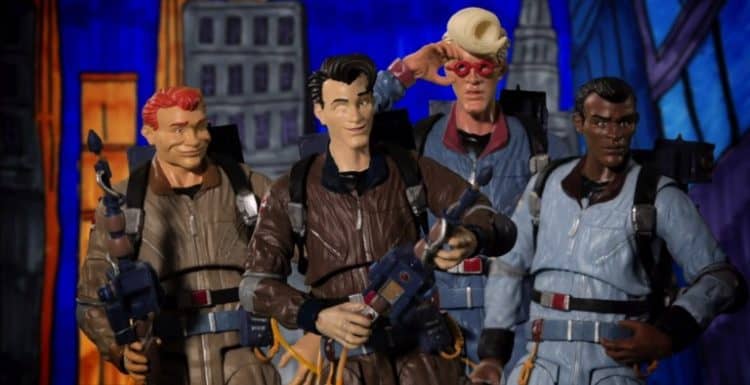 It’s kind of interesting how we never really let go of the old cartoons that we grew up with. Granted, Ghostbusters isn’t as old as some of those cartoons that have been covered in the past, but it’s old enough that you can’t help but smile as you remember Saturday mornings, after a sugar-infused breakfast, bouncing around as you sang along with the theme song and perhaps even emulated the ghost in the opening of the cartoon as you enjoyed the cartoon again and again. Ghostbusters was without a doubt a fun and engaging show when we were kids, though after watching an episode as an adult I couldn’t help but laugh, mostly because as kids the magic of it all is still potent enough that your young mind ignores a lot of missteps here and there. As an adult it’s easy to ignore these imperfections since quite honestly you still manage to get the nostalgic feeling that comes when you realize that this is a part of what made childhood so great. Even better is the fact that the stop motion video follows the cartoon perfectly and doesn’t really deviate at all.

in terms of the toys it’s kind of hard to equate the Ghostbusters with their plastic images since Winston is perhaps the closest representation out of all of them, and even his figure seems to have missed a couple of steps. Was a mustache really that hard to create on an action figure? Then there’s Ray, who looks like the redheaded stepkid of Howdy Doody complete with wide, almost Joker-like smile. You almost expect his jaw to come unhinged and see it work up and down in a dummy-like fashion to be honest. Venkman is another quandary since unlike his real-life counterpart Bill Murray the action figure looks to be in pretty good shape and looks more like the typical movie star stereotype that Murray is not, thankfully. Oh yes, then there’s Egon, who’s sporting a very pale-looking and kind of retro-style hairdo that looks like it belongs on Hairspray more than it does the Ghostbusters. Plus, has anyone noticed that they buffed up Egon a bit? He no longer looks like the genius that might balk at a fight when pushed, but could possibly break a person in half if he felt the need. I know, I know, bashing the action figures wasn’t quite what you expected, but in truth I’m not so much bashing them as I’m noticing the difference between them and their human counterparts and the need for the figures to draw the attention of consumers. After all if the figures were true to life it’s likely that their visual appeal might go down quite a bit and they wouldn’t have sold nearly as much. Thankfully, as Ben Wilson of GamesRadar shows, the love of the movie did eventually allow the toys and games that were created later to show the reality of the movie and its characters.

Throughout their long history though the Ghostbusters have certainly been treasured, talked about, ridiculed, and in one instance someone has tried to replace their legacy, only to be reminded that people loved the movies enough, yes even the second one, that such a decision was questionable at best. The 2016 attempt to bring an all-female team of Ghostbusters into play would have been easier to accept had the idea been more inclusive, as Sam Adams of IndieWire reiterates,Â  a passing of the torch if you will, instead of an attempt to replace the original team and act as though it didn’t exist in the first place. Had the attempt been made to pass the women off as the next team that would take up the fight against the paranormal, then sure it would have been received in a much better light. It was fun to see the cameos of the original team members throughout the movie, but it still doesn’t erase the fact that not only did the 2016 movie not seem to care about the fans’ reactions to their taking over, but they had the gall to turn around and be outraged when the announcement of Ghostbusters 3 came along, indicating that the 2016 version was being swept aside. I could say that karma is a pain in the ass, but honestly it’s what the people wanted and as happens every now and then the people will gladly move towards something that’s a known commodity rather than try to stand up for something new.

The Ghostbusters movie and the resulting cartoon were both occurrences that people wanted and while the cartoon went into greater depth and was never really seen as canon since the movies kind of established that, it’s still great enough to get a smile out of many people when they hear the theme song. Every now and again it’s nice to hear something from your childhood and remember those days when you were a little less concerned about what was going on in the world and only had to think about what ghosts the team was going to deal with in that particular episode.