The Divas of Atlanta are back with an all new season and your boy is excited as hell at the tomfoolery that is about to be unleashed on the world.

Thursday, Bravo finally released the updated cast info and premiere date for the third season of The Real Housewives of Atlanta. As you can see by the photo on the left, Lisa Wu Hartwell is missing from the festivities as she has been regulated to a recurring status this season. In light of that cast change, two new Housewives, Cynthia Bailey and Phaedra Parks, will join the show and bring more intrigue and drama onto the table. Cast favorites NeNe Leakes, Kim Zolciak, Kandi Burruss, and Sheree Whitfield will all return with their own drama in tow; and from the look of the preview clip of what’s to come, said drama will be as juicy as those Georgia peaches the ladies hold in the opening credits. So without further ado, let’s meet the two new ATL Housewives and see what everyone has in store for this year.

First up is Phaedra Parks, who is a well renowned entertainment lawyer in the A and is good friends with Dwight and Kani. Phaedra is the Managing Partner of The Parks Group, PC and is involved with a lot of the charities within the Atlanta area. However, Phaedra’s career might be overshadowed by her younger husband, Apollo, who is an ex c0n. I know mouths will be wagging about that. The two are expecting their first child, which could bring drama on its own…

Next up is Cynthia Bailey, who is the top model that Tyra Banks’s girls dream of being. Her first cover was Essence magazine and she has appeared on the runways of Paris and Milan’s fashion week and has worked with Bill Cosby. In short, she’s the real deal. In her personal life, Cynthia has a 10-year old daughter named Noelle and her boyfriend Peter Thomas, who is ready to settle down with her. Cynthia’s hesitation sounds like it will be the focal point of her drama this season, but with NeNe Leakes by her side, I am sure she will come out on top.

Now, it’s time to see the ladies in action! Here’s the clip:

Now, tell me that you are not excited?

The Real Housewives of Atlanta comes “powing” back and “checking” boos on October 4th, @ 9/8c only on Bravo. 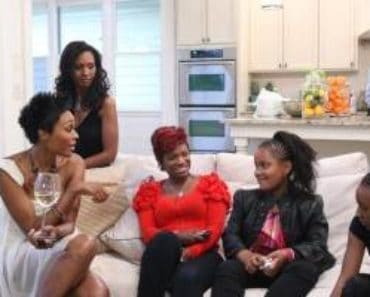