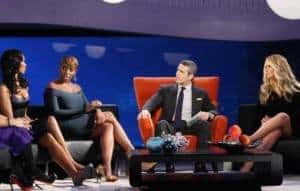 Well, while everyone else was watching the Grammys, I knew there was a sliver of Real Housewives of Atlanta fans who left that party for ringside seats to the reunion we’ve been waiting for. Unfortunately, there wasn’t much to pick over tonight, but again, I am reserving most of my comments until watching the second part of the reunion next week. Nevertheless, there were some topics of interest that stuck out and have to be deciphered.

If Looks Could Kill

Kim and NeNe’s facial expressions while one or the other commented on something were filled with toxins and could’ve killed someone on sight. NeNe looked practically bored throughout the entire reunion, but didn’t hide her disdain whenever Kim opened her mouth. In fact, NeNe’s attitude was the equivalent of a big red button that you are not supposed to touch, but Andy Cohen couldn’t help himself and kept pressing the proverbial button, injecting venom into the atmosphere in the process. While I always get a kick out of NeNe’s no nonsense attitude, tonight was a different story as she had her guard set on “Kill” and no one was safe. Well, maybe Cynthia was probably safe.

The battle between the two Athens women came to a head tonight as questions arose about how much did NeNe and Phaedra knew each other. Phaedra claims that NeNe knew of her through Phaedra’s older brother (which was kind of a dig at NeNe’s age), but NeNe claimed the opposite, saying she doesn’tknow Phaedra period. Phaedra went on the defensive by claiming that not only does NeNe know of her, but that NeNe contacted her during Bobby Brown’s reality show Being Bobby Brown days to talk about a reality show of her own. The defense kind of worked in Phaedra’s favor, because she kind of caught NeNe in a lie. But NeNe wasn’t detered and said that despite all of that she still doesn’t know Phaedra really. The crazy thing about all of this? The argument allegedly went on for an hour. Now that’s bananas…

NeNe vs. Kim – Round One

The whole “Sweetie is a slave thing” was brought up again and NeNe and Kim took off the gloves and went at it. Admist all of the screaming and shouting between the two ex-best friends, I couldn’t really tell what was said besides NeNe commenting on how Kandi’s tour folks were put off by Kim treating Sweetie like a dog. Phaedra eloquently explained to Kim why most of the women (and people in general) were offended by her treatment of Sweetie, using race relations in light of African-American achievements as a means to back up her claims. In fact, Phaedra’s explanation was the most concise way to spell out why people (black and white) were offended by Kim’s actions, despite Kim not getting it.

NeNe then clarified that she thought Sweetie’s treatment was just wrong on a humane level, race excluded. This in turn sent the two enemies into another shouting match about who pointed a finger in whose face first, who was the rudest, etc. The argument closed the first hour of the season three reunion, and will no doubtedly resume during the first few minutes of next week’s installment.

Other moments of note:

– Despite some of the things said towards Phaedra throughout the season, she seemed to take everything in stride with a bright smile on her face. I have nothing but mad respect for that.

– The marriage license debacle was brought up, but Cynthia didn’t say much about it besides being shocked about it and knowing it came from a good place. In other words, not the sparks we were hoping for.

– NeNe hasn’t spoke to Dwight Eubanks since the last time they taped. Was that the final nail in the coffin for NeNe and Dwight’s friendship?

In the end, the first part of this RHOA reunion was not what I was expecting, but I wasn’t disappointed. I will give more thoughts after I see the reunion as a whole next week. Until then, what was you thoughts on tonight’s reunion?