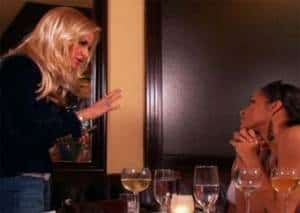 Yes, you read that headline right.

SyFy released a press release today to promote the upcoming crossover between the two cable reality show giants, The Real Housewives of Atlanta and Ghost Hunters, which will air later this fall. Original Ghost Hunters Jason Hawes and Grant Wilson will be joined by Atlanta Housewives NeNe Leakes, Kim Zolciak, and Sheree Whitfield as they ‘investigate’ Rhode’s Hall, aka the ‘castle on Peachtree Street’ for a crossover event that is bound to draw in ratings as well as possibly a million laugh attacks across the nation.

While I normally don’t condone the tomfoolery that is Ghost Hunters, I will most definitely be watching this comedy caper when it airs in the fall. Having NeNe, Kim, and Sheree run from ghosts while looking ‘flawless’ (with their “eyes popping and lips busting”, mind you) warrants a good laugh or a hundred. We will keep you updated about this epic crossover here on TVOvermind.

What do you guys think? Will the ATL girls be scared out their weaves? Or will they scare the ghosts instead?