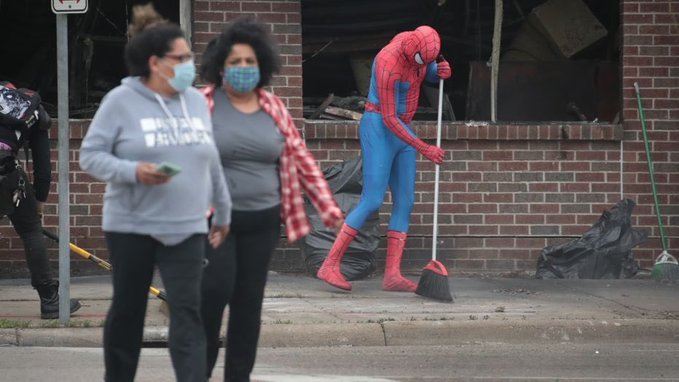 What’s really great about this image of Spider-Man cleaning up after the Twin Cities riot is, as Katherine Stinson of Screenrant states, it’s quiet and it’s humble, not the fanfare that came when those that are well known in the public eye decided to step up and grab their share of the attention. Some folks might want to state that a man dressed as Batman showing up to a riot, or another dressed up as the Joker, or celebrities making their voices heard, are simply being inspirational and taking a stand against injustice and inequality, but it’s a bit too easy to forgive them the idea of cashing in and letting people see them standing up and offering large sums of money to one charity or another, but not actually getting down and walking the street among the same people. John Cusack could be said to have gone this far, as his most recent altercation with the police would prove, yet even that falls short of awe-inspiring since to be fair the riots and the protests that have been used by others to loot and burn down various buildings and businesses haven’t done much but increase the divide between the people in the past week. And yet, here’s Spider-Man, a well-known pop culture icon, sweeping and cleaning up without saying “Look, here I am”. That’s inspiring.

It’s easy enough to give credit to the celebrities when they do give to charity and to those in need, but a great way to show that they actually care about people would be to see them on the street, actually HELPING instead of writing checks. Zak Cheney-Rice of the Intelligencer has something to say about this topic. Some stars have done this, some have actually hit the streets and tried to understand their fans a little better, but at the end of the day they’ll go back to their mansions and likely breathe a sigh of relief that they still have their millions and the opulence that surrounds them. Likely as not, this neighborhood Spider-Man will still be around, doing his thing, and trying to piece together a neighborhood that will hopefully recover at some point. Hopefully the point will be realized by people eventually, we don’t need big-time celebrities to write the checks or tell us ‘we’re all in this together’ over and over. We don’t need them to offer up their kind words and well wishes. What would be better is to actually use their influence to speak to people, to find a way to remind them that tearing down one neighborhood after another is not productive, and that many upon many people are in agreement that the officers responsible for the death of George Floyd should be in prison without any hope for bail. That message has been attempted by many people at this point, but the sad part is that no one wants to listen. The divide in this country is simply too great at this point and unfortunately, there are celebrities that are helping it to widen, whether they know it or not.

Heroes such as the man in the suit in the picture above are the kind of people we need right now, people who are bound to clean up, to remain humble, to simply go on about their lives and remember that forward is the only way, and to move forward we have to accept each other instead of pushing each other away over our differences. People don’t want to hear this though, and that’s saddening. The fact that they appear to want to hear that we’re different, and this divides us, is terrifying in a way as these are words that can create friction, conflict, and eventually a feeling that there is no other way to think but ‘them and us’ when speaking of the human race. Instead of ‘all of us’ it’s become ‘them, and us’. Olivia Barrow of Medium had something to say about this. We are not our ancestors, and any history that this country has been built on has changed, adapted, and evolved in numerous ways to allow for anyone and everyone to have an equal opportunity at a good life. The fact that people would rather bring up past history and the facts as they see them is yet another issue that has yet to be resolved. America isn’t perfect, there’s no doubt of this, but it’s our home, all of us, and as a result it’s past time for all of us to recognize that to make it work we’ll have to move ahead together, rather than at the expense of one another.

It is nice to see someone that’s attempting to lift up the spirits of others while not seeking to grandstand or otherwise gain that much notice, but then it’s kind of hard not to notice Spider-Man, or the fact that he’s one many heroes just trying to keep the world in one piece.