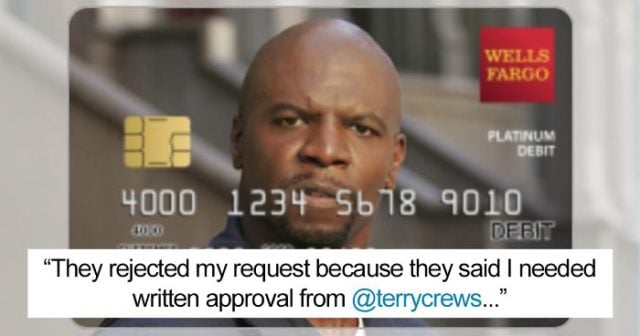 Sometimes people surprise me and everyone else, and sometimes actors prove that they can be just as cool as they seem in films and TV. But this is something that I’m impressed by and also kind of shaking my head over simply because of what it is. I’ll stay as positive as I can for this article since it is pretty cool that actor Terry Crews did this for someone. It’s especially touching if this woman is a big fan, which she seems to be, and wants a little incentive in her wallet. I can understand Wells Fargo’s hesitancy however since putting someone’s likeness on a card that they issue is a touchy subject that could get them in a lot of trouble if they do it without asking that individual. Thankfully this woman went about it the right way and did her best to do as they asked by getting Crews’ permission.

Two weeks later she had her debit card with the stern-looking visage of Terry Crews on it, and the reason she wanted it is why I’m still shaking my head. It makes sense in a weird way but it also indicates that a person might have some serious control issues that need to be addressed. The mere fact that she wanted Terry Crews on her card in full scowl to discourage her from buying too much seems to indicate that she has issues with money and impulse control. No offense to this woman but a picture on a card is kind like putting a bandage on a broken water pipe. It might stop some of the flow but eventually that sucker’s going to keep flowing no matter how stubborn that bandage holds on. It makes sense in a way, because honestly Terry Crews scowling at you from your debit card can only last for so long.

To each their own though. The actor even tweeted that he does the same thing by keeping a picture of himself in his wallet with the same expression so that he doesn’t spend too much on things he doesn’t need. I might be a little more impressed if he wasn’t a major movie star who can afford a lot more than the average person. But still, it is very cool that he would do this for someone and at least try to help out. But really, honestly, this woman needs a little more help than a photo scowling at her every time she pulls her card out. Plus, what happens when it’s a purchase she needs to make? Does that scowl suddenly become an approving look rather than an admonishing one?

It would depend on the psychological state of the woman in that moment I suppose. A lot of people tend to see what we want to see and interpret different images in our own way. Personally I don’t think I’d want my debit card looking like it’s judging me each and every time I go to spend a few bucks on things I need or want.