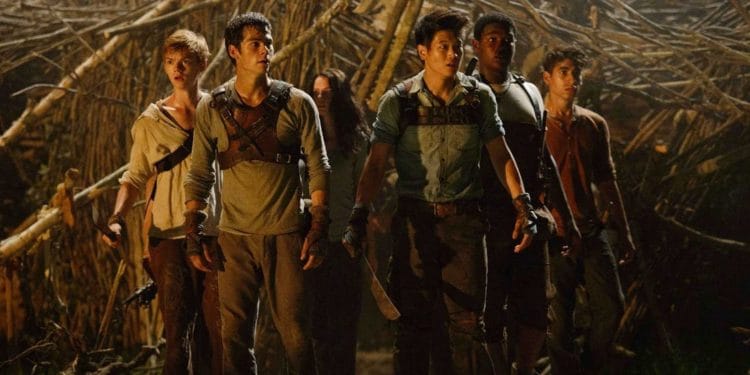 In the wake of the spread of the Coronavirus, rentals for the Steven Soderbergh film Contagion — which details in highly accurate detail how a deadly virus might quickly spread across the world — have skyrocketed. It makes sense: the film feels eerily prescient, both from where it locates the epicentre of the virus (China) and the way it makes it feel like the story is playing out on many different levels.

But there is another film (or should I say group of films), that while mostly critically mixed at the time, deserves a closer look in wake of the Coronavirus crisis. I am talking, of course, about the Maze Runner Franchise, a trilogy of films that tried to capitalise on the Young Adult dystopian fiction wave — started by The Hunger Games — while never making much of a true impact.

The Maze Runner trilogy is one of those fascinating film franchises where it actually gets better with each instalment. The confident, thrilling train heist at the start of The Death Cure is miles away from the unfocused subpar Lord of the Flies-theatrics from the first film. A very messy series overall, its a miracle Wes Ball was allowed to carry on to develop his vision from something bland to something far more interesting and intermittently profound.

It starts with Thomas (Dylan O’Brien) on a lift to a mysterious location. It eventually brings him to a walled-in enclosure with a group of other boys. No one knows who they are or why they’re there. Neither do we. There seems to be only one way out: through a dense and impenetrable maze. This film, panned by none other than the director himself, who admitted the special effects budget ran out halfway through, is pretty much unwatchable. It’s also fascinatingly context-free: only once the boys get out of the maze can they find out its purpose.

The boys come across a video in a laboratory, which has been shot to pieces. Deliciously narrated by Patricia Clarkson as Ava Paige — who injects the series with a much-needed sense of acting chops and class — she explains that not only has dense heat made the world almost unliveable, turning the earth into a huge desert, but that a deadly brain virus has quickly spread throughout the world. Only a few teenagers are immune, and they have been rounded up and put in the maze.

The maze has been set up by a company known as World In Catastrophe: Killzone Experiment Department, W.C.K.D for short. They believe that they can use this experiment in order to harvest their immunity for clinical trials. While its likely that scientists will find a cure for COVID-19, The Maze Runner asks a terrifying question: what if they simply can’t? How far would scientists go to use immune people in order to save the rest of the world? While there are definitely not going to be any mazes, it does offer a vision of the world where governments will try anything to save mankind.

With the sequel The Scorch Trials, The Maze Runner franchise suddenly becomes worthwhile. The beginning of the second film is fascinating, revealing that the raid on W.C.K.D property was in fact just a simulation to make the teenagers come along to another W.C.K.D zone. Under a world where governments have to make tough choices, the information given to public is naturally limited; The Scorch Trials just takes this to a fake-news extreme.

Freed from the contrivances of dull-looking, ever-moving walls, the second film takes us through a Mad Max-like universe, choc-a-bloc with zombies, gunfights, and expertly-rendered production design. Suddenly a series that was hitherto dull finds a narrative backbone and a purpose for its existence.

Throughout the final two instalments, it asks a key question: how much personal freedom are we willing to give up in order to preserve our health? This moral dilemma is weaved into the franchise through the character of Teresa (Kaya Scodelario) who is an ex-W.C.K.D. employee who, although hanging out with the boys, believes that the mission of the company, if effected properly, is a morally righteous one. This comes to a head in the third entry, The Death Cure, which reveals that there is one city still left standing, albeit with walls blocking it from the rest of the world. Teresa, along with Ava Paige, believes that a vaccine is just around the corner, W.C.K.D. kidnapping their immune friend Minho (Ki Hong Lee) against his will for medical testing. After all they really could find a vaccine that saves everyone, making The Maze Runner franchise an exploration of the pros and cons of Utilitarian thinking.

Perhaps it would be different if everyone was on the same page. But some people use crises such as this for their own ends. This amoral element is exemplified by W.C.K.D heavy Janson (Aidan Gillen) who takes sadistic pleasure in the torment of these young teenagers. For him, it doesn’t matter what the crisis is: all he wants is control.

In the end, Janson, Teresa and Thomas represent three sides of the argument: control, utilitarianism and individualism. We can see these narratives colliding with each other in the world today in the variety of responses to the coronavirus. After all, its story isn’t just the story of how the disease is spreading, but also the story of how it is being contained by different governments. The varieties of responses, which differ wildly from country to country, offer different narratives when it comes to disease containment.

Countries under severe sanctions such as Iran, or prone to mismanagement like Italy, have suffered, while China is able to put cities on lockdown without any legal issues whatsoever. Meanwhile, in the capitalist-gone-amok USA, people are being charged thousands of dollars for testing while there are serious discussions about how much the vaccine should cost!

Many governments realise that while diseases must be stopped, they also offer opportunity: both for power and for profit. A good response can boost election ratings, giving politicians the incentive to lie about the numbers (see Trump and probably Putin) while a bad “response” (which may require, god forbid, actual honesty) is lethal to any government. While the currently reported death rate of between 2.5-3.4% suggests that the virus will not reach the horrendous levels of The Maze Runner, the human element of this story, like the trajectory of the franchise, remains utterly unpredictable.