Occasionally a piece of TV and movie news pops up that simply must be addressed. The internet is ablaze today with news that the original rights holders of the Buffy franchise are planning a rebooted movie. Observe:

A new incarnation of “Buffy the Vampire Slayer” could be coming to the big screen. 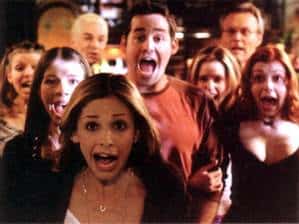 “Buffy” creator Joss Whedon isn’t involved and it’s not set up at a studio, but Roy Lee and Doug Davison of Vertigo Entertainment are working with original movie director Fran Rubel Kuzui and her husband, Kaz Kuzui, on what is being labeled a remake or relaunch, but not a sequel or prequel.

While Whedon is the person most associated with “Buffy,” Kuzui and her Kuzui Enterprises have held onto the rights since the beginning, when she discovered the “Buffy” script from then-unknown Whedon. She developed the script while her husband put together the financing to make the 1992 movie, which was released by Fox.

The new “Buffy” film, however, would have no connection to the TV series, nor would it use popular supporting characters like Angel, Willow, Xander or Spike. Vertigo and Kuzui are looking to restart the story line without trampling on the beloved existing universe created by Whedon, putting the parties in a similar situation faced by Paramount, J.J. Abrams and his crew when relaunching “Star Trek.”

One of the underlying ideas of “Buffy” allows Vertigo and Kuzui to do just that: that each generation has its own vampire slayer to protect it. The goal would be to make a darker, event-sized movie that would, of course, have franchise potential.

The parties are meeting with writers and hearing takes, and later will look for a home for the project. The producers do not rule out Whedon’s involvement but have not yet reached out to him. Speaking from Tokyo, Fran Kuzui said the company is constantly approached not only about sequels but theater, video games and foreign remakes for “Buffy.” When Vertigo’s Lee contacted them, they were intrigued.

No. No No NO! This is just wrong. And it simply cannot, under any circumstances, be compared to the successful – and enjoyable – reboot of Star Trek. Permit me to explain.

I may be opening myself up to fan boy attack, but from what I’ve read and from my own talks with original Star Trek fans, the franchise was essentially dead. Recent movies were declining in quality and were becoming mere parodies of themselves. Much in the same way that Batman movies, before Batman Begins, were killing the franchise. Handing the reins of Star Trek to an established and creative man like J.J. Abrams was a brilliant move. So was giving Batman to Chris Nolan. What harm could they have done? It’s not like they could have possibly made the situation worse (sorry, George Clooney, but it’s true). In the end, both filmmakers revitalized the franchises by portraying origin stories that brought the original characters back into sharp focus and made us care for them again.

Buffy is different. While the series may have floundered a bit in middle seasons (I can admit this, for I am a die-hard fan), the show ended on a fantastic note. The original 1992 movie was a horrible parody of all things vampire. The movie was original written by Joss Whedon, but he has publicly claimed that the powers that be twisted his script into the final horrible, and unrecognizable, product. The television show was his do-over and he did it so well. It ended on a perfect note and even spun off the Angel series (of which, again, I am a huge fan). Buffy is not dying. She’s not dead (anymore). There is no need to reboot the franchise.

Ms. Kuzui talks of introducing new characters and a new storyline. What for? We don’t give a flying flip about new characters. It’s the old characters we love. Sarah Michelle Gellar’s portrayal of Buffy. Spike, Giles, Willow! These are the people we cared about. If Joss Whedon were to announce tomorrow that he was bringing back the original cast to do a Buffy movie under his direction I would pre-buy my ticket before filming even began. However, you cannot capitalize on the recent – and still somewhat inexplicable – popularity of Twilight and vampires and remake the Buffy movie.

Fran Kuzui has apparently not directed a single movie since the original Buffy movie. This does not bode well. At least J.J. Abrams and Chris Nolan proved themselves as directors and creators before their franchise reboots. You’re playing with fire, Ms. Kuzui. I hope you know what you’re getting yourself into.