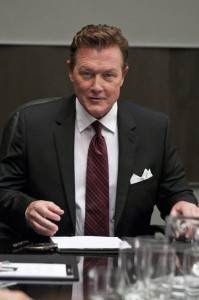 I have to admit, the idea of this episode could not be more perfect to me. I love Burn Notice, I love Jeffrey Donovan, I freely admit to a crush on Coby Bell, and I’ve been a fan of Robert Patrick since I was a kid. All three of those people on this show? Well, that’s just heavenly.

As we know from last week, Patrick plays John Barrett, the CEO of a Big Technology Company who is out to get his hands on Simon Escher’s Bible and use it to bring down Vaughn and his people. At this point, it really is the lesser of two evils for Team Burn Notice. Sam, Fiona and Michael are having a poolside meeting to discuss a fake Naval Intelligence file that they plan on passing off to Jesse implicating Barrett. Jesse proceeds to kick himself for not connecting the dots, not knowing he’s being had by his own team. This puts all the wheels in motion, as Michael gets Jesse to agree to help him in contacting Barrett and setting up a meeting…I mean showdown. ‘I don’t mind being the bait as long as the trap is good enough,’Michael informs Jesse, knowing this won’t be easy. (Of course not. This is Robert Patrick we’re talking about. Anyone remember Terminator 2? The X-Files? The Unit? Double Dragon? Okay, you were probably better off forgetting that last one.)

While the boys are off on that tangent, Fiona and Sam take the case of the week: that of a wealthy woman named Emily whose money was swindled by her supposedly perfect boyfriend, Charles. As Fiona says, it’s a job for Sam, who breaks out the Chuck Finley persona over her objection. The two of them go to schmooze with their target and his new lady friend, and Sam tries to convince Charles they’re playing the same game, with no success. Fiona would much rather shoot him (obviously), and has to be nearly dragged away. The new plan: drug the guy and do it with a smile. What follows is pretty much a tutorial on how to get your friends, or in this case enemies, so drunk they wake up on the floor with no recall.

Michael and Jesse are watching their trap via laptop, waiting to see if Barrett or any of his goons show up. Their commentary is hilarious as one of the goons manages to shock himself and end up with two guns aimed at him. While he enjoys being tied up in an abandoned boathouse, Jesse goes to help Fiona and Sam with their new houseguest. This is Bruce Campbell at his finest: loud, boisterous and unruffled by an angry British guy aiming a golf club at him. Having a panic attack, Charles takes off with Fiona and Jesse in pursuit. They follow him to a law firm where he tells his money manager that he thinks he went on a drunken spending spree (which is exactly what we want him to think). Unfortunately, they get caught out. Fiona’s idea of keeping their cover is sucking Jesse’s face off. Thankfully, while it’s massively awkward between them after the fact, we’re not subjected to anything more than awkwardness. Fiona and Jesse are too good for that kind of character assassination.

They take their information to Barry (too bad we don’t actually get to see him this week), who tells them that Charles has too many accounts to pinpoint where Emily’s money is. Moving on to Plan B, Sam elects to turn up the heat and make Charles even more paranoid to the point where he believes he needs help — and of course, help is going to be named Michael Westen. Fiona and Jesse set up a very obvious listening device. ‘If Charles can’t find that thing, he’s more of a dumbass than we thought,’Jesse tells Michael when they meet up again. They tell Barrett’s senior henchman that either Barrett comes down to get the Bible or they’ll burn it.

Charles finds the bug in his car and calls Sam in a panic. Sam, of course, suggests that he call in a friend for a meeting. Michael plays the ‘˜dirty cop’routine perfectly, complete with mocking Charles’British accent. Unfortunately for them, Charles gets a call from his money manager telling him that they know Emily has hired somebody to go after him, and he tells Sam he’s on his way to Rio. Meanwhile, the money manager has sent armed goons to Emily’s place for good measure. ‘Whenever possible, it’s best to avoid charging into a building filled with angry men with guns,’Michael says. There’s your ‘˜things I learned from Burn Notice‘for this week. Not to mention, Fiona singlehandedly to Emily’s rescue.

Now it’s on to Plan C. Sam gets Charles drunk again, and he wakes up thinking he’s beaten Emily to death and lit her boat on fire. Of course, as he’s panicking, Sam is there to fill in the blanks. Michael ramps up his bad cop impression even further over the top, and Charles caves this time, calling his money manager to drain his accounts while Sam and Michael look on amused. He hands Michael a million dollars in cash and thinks he’s going to Rio after all, until Sam shows him just exactly how he’s been had. The limo, with a gun-toting Fiona driving, dumps him out for his money manager’s goons to find.

Our first concluding scene for the episode has Maddie leaving town and heading for Tampa. She’s upset, saying having to have Jesse around while watching Michael lie to him is getting to her. She doesn’t want to come back until everything is over. Before Michael can really talk to her, Barrett calls him to say he’s in Miami, big black SUV and all.

Meanwhile, in the best scene ever, Fiona arrives at Michael’s place to see Jesse with a gun in her face. He’s talked to Marv (remember Marv?) and Marv has uncovered the security footage of Michael and Fiona leaving Jesse’s workplace. Our dear friend Jesse has finally figured it out: Michael burned him. She really thinks he’s going to shoot her, but he takes off instead. She calls Michael in tears, warning him that Jesse knows and is out on a rampage. One hell of a way to end the season, since the summer finale is next week!

This episode absolutely lived up to the hype I had made for it in my head. Robert Patrick may not be in it much, but he certainly establishes himself as a Very Bad Guy. (I wonder what will become of Vaughn, or if Vaughn will face off with Barrett, considering Vaughn is also established in that category.) The case of the week is interesting enough, though I couldn’t help thinking that the guy who plays Charles was a poor man’s Chris Vance (Gilroy for you hardcore fans), right down to the sound of his voice. Where the episode really snagged me, though, was in doing its job and bringing everything from the season arc together for the summer finale. Burn Notice laid out a big arc this year, and it can be easy for a show to mess that up royally, but everything falls into place here. We get a callback to Marv, whom it’s safe to assume told Jesse about the evidence that Fiona destroyed earlier in the season, and the reveal of the security camera footage makes perfect sense. It’s not one of those ‘oh, we made this up because we were out of ideas’reveals. Michael didn’t just cop out and tell him because the show ran out of time; Jesse figured it out for himself in a way that makes sense. We know from this episode two great things: Barrett and Michael are going to have it out, and Jesse and Michael are going to have it out. That’s three amazing actors having a chance to show us what they can do, not even counting the rest of Burn Notice‘s stellar regular cast. (If Sharon Gless doesn’t win that Emmy, I will be upset.)

Speaking of the acting: how much do I love this cast? It’s easy on an action-centric show to just get pretty people who can act tough and not much else. As a film critic once said, it’s very easy to get someone who can turn the furniture over and look vicious. It’s a whole other thing to be able to credibly suggest malice and be legitimately intimidating. This whole cast can really act. It was one heartwrenching thing to see Maddie plan to cut ties with Michael (however temporarily) because she’s calling him out for what he’s had to do to Jesse. It was another to watch Coby Bell finally explode and have Jesse confront the reality that the people he trusted the most are the ones he never should have trusted at all. Yet a third great moment was that utter fear, grief and even self-loathing in Gabrielle Anwar’s performance when she honestly believed that Jesse was going to kill her where she stood. These actors have been bringing their ‘˜A’game all season. For those of you who’ve doubted Coby Bell, that one scene is a sterling example of why I absolutely adore him and his character. The man broke my heart, made all the worse by the fact we all knew it was coming. That’s the brilliance of it: we all knew that what we’re about to see was coming. It’s all been laid out. It would be easy for us to get inflated expectations or maybe even get bored. Yet Burn Notice continues to be amazing even when it’s not necessarily surprising, because it’s just that uniformly good in every aspect.

I am thankful that after next week, we only have to wait until November to see the second half of the season, because it may just be the best yet.