Medford, Mass. Shipments out of Elias Cryonics – Research and Storage must routinely happen in the dead of night, as no one seems to be overly concerned about the truck at the loading docks. A car pulls around and some guy (let’s call him Curtis) says he’s lost. He’s not. Curtis and his accomplice, who seems to work for the company, shoot the security guards who are supervising the loading of a bunch of cryogenically frozen heads. However, one of the guards shoots back and finally kills the accomplice with a head shot. The dead accomplice bleeds quicksilver.

Harvard, Mass. At first I thought Walter was cooking again and that Astrid was chopping up chives. Nope, they are tapeworms. He is trying to make a concoction that will help Olivia recover her memories of her trip to the other side. Peter thinks the idea is insane but Olive downs the flatworm cocktail before anyone realizes what she is doing.

Medford, Mass. Peter, Olivia and Broyles meet up at Elias. This is the third cryo-lab to be robbed in recent weeks. Walter is eager to see the body that is bleeding silver. As he examines the corpse, Not-Charlie comes over. He looks like he’s coming off a three-day bender. Walter finds an insta-disguise device in the corpse’s pocket. He hands the device over to Peter.

Not-Charlie meets up with Curtis, who tells his partner that his current form is killing him. Unfortunately, Not-Charlie can’t switch bodies because his device is broken and he doesn’t have permission to return to the other side. As they talk, Curtis cracks open the cryo-containers and examines the head. He doesn’t find what he is looking for and tosses the head into a ravine, where it joins the others. They make plans to rob a fourth lab in North Carolina. Curtis and Not-Charlie think that Bell might have told Olivia where to find whatever they are looking for (which is probably a specific head.)

Broyles wants Olivia to have a protective detail; obviously whatever happened to her is not over. She declines. Meanwhile, Peter declines to hand the working device over – he wants his friend to have a look at it first.

Back at the lab, Walter’s examination is progressing. The body is not human. It is the mercury that allows the body to maintain its shape. He suddenly gets a “oh, I just realized something and it’s not good” look and tells Astrid to call Olivia immediately. 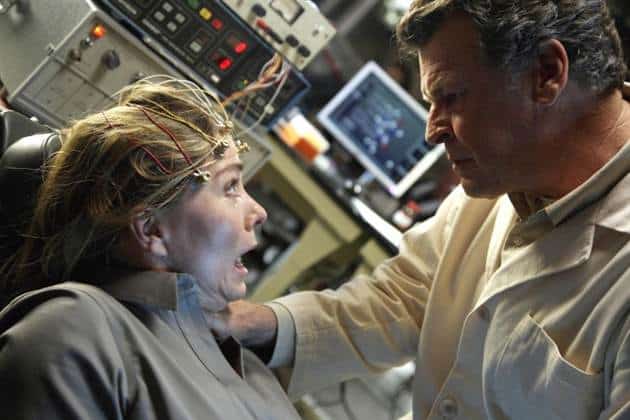 Good news, bad news. The bad news is that Walter has discovered the corpse’s blood is 47% mercury. Why is this important? Because the first shapeshifter he autopsied (the nurse) had only traces of mercury. Which means… she was a victim, not a shapeshifter. The real shapeshifter is still out there somewhere.

The good news is that they may have a way to find him. Rebecca Kidner, one of Walter’s past experiments, took a bunch of LSD 20 years ago and saw people’s auras. She could sense the difference of auras of people from the other side. Perhaps she still can.

Olivia calls Not-Charlie to tell him that they might have a lead on the shapeshifter. Obviously, not a good one, since he is the shapeshifter, but still. Not-Charlie isn’t doing too well. He buys a dozen mercury thermometers, cracks them open and drinks the quicksilver. He needs it to maintain his form.

Olivia takes the insta-disguise device to Nina Sharp. She tells her that the device seems to be streaming information. They believe that it is the image of the last person the shapeshifter took. Nina’s tech says that he can reconstruct the images – even on the broken device – now that he has a functioning one to work off of.

Meanwhile, Peter and Walter track down Rebecca. She is more than pleased to see Walter. It seems that she is still hot for teacher. Unfortunately, her powers faded after the first couple years. She is more than willing, however, to be shot full of LSD again to see if they come back.

Back at the lab, everyone preps Rebecca for her acid trip. Concurrently, Astrid is receiving the streaming rendering of the shapeshifter’s last victim. Before Rebecca goes under, she tells Peter that she remembers seeing him when he was just a young lad. Walter tells Peter to ring a bell to help put Rebecca into a suggestible state. Peter does and Olivia collapses like her strings were cut. Hello, Pavlov. 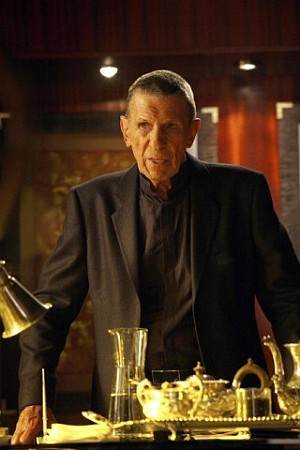 Pay attention, people, here’s where it gets interesting.

Olivia wakes up in William Bell’s office. He is pleased to see her and tries to establish a friendly tone by reminding her that they knew each other well when she was a child. He talks about the other children he experimented on. Olivia knows about them; she is pretty much the sole survivor. Bell isn’t surprised. He says she was always the strongest of the experimentees. She doesn’t want to hear it; she wants answers.

Olivia is disorientated throughout the entire meeting. Her memories seem to jump; she can’t recall the whole conversation. It is full of holes. Bell tells her that the disorientation is due to the time slip. (Ha! I was right. There is a time dimension shift when you cross over to the other side.)

Bell tells her that someone was trying to prevent their meeting. He brought her to the other side for a particular purpose.

He has seen history repeat itself often enough to know that a storm is coming. He can count on one hand the number of people who can safely travel between the worlds. But the other side has created hybrids, spies to send on ahead while they are trying to perfect a way for normals to cross. The shapeshifters are simply the first wave. Bell tells Olivia that he has chosen her to guard the gate. The shapeshifter on the other side have found someone who can open the door. She has to stop them. He shows her a symbol will identify their leader. She is supposed to show it to Nina Sharp because he can’t go back yet.

As he prepares to send her back, he warns her that he pulled her from a moving car. Momentum must be maintained. And because physics is tough, it is really going to hurt when he sends her back. He rings a bell on his desk. And we all know how that worked out for her. 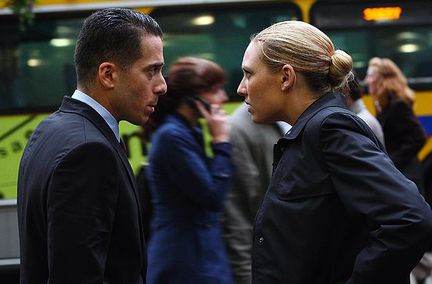 Olivia awakens because Peter has jammed a hypodermic needle into her heart. Olivia is desperate to get to Nina Sharp.

Peter and Walter say goodbye to Rebecca. She stares at Peter in the strangest way. When he questions her about it, she says it must be the drugs. Walter tells Peter that he wants to see Rebecca home. Peter lets him go.

Nina recognizes the phrase “a storm is coming.” So do Supernatural fans, and while it’s a different storm, the end of the world is still night. Anyway, Bell used it when he was telling Nina about the Pauli exclusion principle. The two universes cannot occupy the same space. One must be destroyed and he’s afraid it will be our world. While talking to Nina, Olivia remembers something else from her conversation with Bell – Laston-Hennings Cryogenic. That is where the much-desired head is located. Before she can impart this knowledge to Ms. Sharp, she receives a text from Not-Charlie warning her that Nina is a shapeshifter.

She meets Not-Charlie outside of Massive Dynamic and tells him she almost spilled the beans about the head being at the North Carolina facility. Charlie calls someone – I assume Curtis – to give him the news. While he’s on the phone, Olivia receives a picture of the rendering: Charlie. He knows that she knows so he tries to kill her. He succeeds in beating the hell out of her until they are distracted by a passerby. Olivia shoots Not-Charlie in the head and it is little comfort that he bleeds silver.

Walter takes Rebecca home. She invites him in but he declines, adding it was wrong for him to have taken advantage when she was younger. He leaves her on the doorstep.

Broyles tries to comfort Olivia after she killed her not-partner. He has more bad news as well. Someone hit the facility about 15 minutes before the FBI got there. They can assume the head was stolen.

It was. Curtis has it. The symbol is a scar under the head’s hair. Curtis places the head on an autopsy table a couple inches above the neck of a headless corpse. A pool of mercury under the head begins to react, forming a neck between the body and head. When the process is complete, the once-frozen head opens its eyes.

Will Rebecca Kidner make a reappearance? I thought it was strange when she recognized Peter. Later, when she was leaving, I wondered if Peter too was a shapeshifter. But perhaps people from the other side have different auras as well.

I have to watch that whole scene with Bell again. I was transcribing and I think I missed a lot.

Pulled her from a moving car, eh? There is the almost accident theory. Which admittedly makes sense. And then there is my theory. He pulled her from a moving elevator car. Semantics count. That momentum, plus the additional momentum from when he pushes her is what propelled her through the windshield. Because there is a time shift, as he stated. Yup, I’m going with that.

What Bell didn’t tell us is why the other side wants to invade. Any theories?