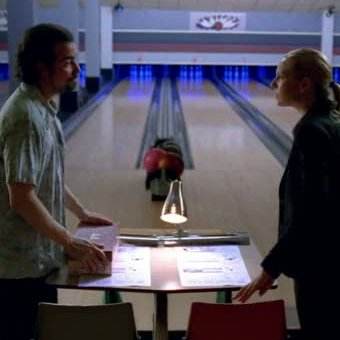 Olivia arrives at Sam’s bowling alley bearing gifts: a pair of velcro bowling shoes. She thanks him for his help and informs him that she got her memories back. She’s cured! Not so fast, says Sam. He gives her an inscrutable look and asks who died. Charlie. He tells her that with all the changes in her life, she needs to find something that makes sense. He gives her a mystery assignment, almost giggling when he says he hopes she likes red.

Seattle, Wa. A man named Greg gets off an elevator carrying a briefcase. His coworkers warn him that he is in trouble with the boss but he is more concerned about the fact that they all look like monsters. He goes into the conference room and proceeds to beat his boss to death with the briefcase. He then collapses and his eyes go nuts (technical term.)

Back in Boston, Peter and Walter unpack in their new home. Astrid arrives with a housewarming gift for Walter and a case file for Peter. She saw the video of Greg-the-attacker and comments on his nutty eyes. It’s a not-normal case so off they go. When Peter, Olivia and Walter arrive in Seattle, Olivia asks the cabbie for his business card, in case they need a ride later. He’s wearing a red sweater but that may be a coincidence.

At the hospital, Greg’s doctor tells them that Greg’s been asleep for 16 hours, almost as if he were drugged. Walter doesn’t want to go in. In fact, he nearly has a panic attack at the idea. Peter and Olivia question Greg. He says it was like the office was infiltrated by some kind of creature and that his boss was the head demon. Then he has a seizure, his hair turns white and he dies.

Walter examines the body and his OCD is in full swing. He does not like being in the Seattle hospital at all. When the local medical examiner comes in, Walter already knows what he is going to say. Greg had high levels of adrenal hormones and died of acute exhaustion, which is weird because he’d just been asleep for 16 hours. Now that they know COD, Walter begs Peter to let him go home. Peter acquiesces. They assign Walter an FBI babysitter named Agent Kashner for the ride home. Peter gives him several instructions for the care and feeling of Walter that I was sure that the last one was going to be to never, ever feed him after midnight. No problem, says Kashner. Ha! That’s what Billy Peltzer thought.

Olivia says goodbye to the medical examiner and asks him for a business card. He’s wearing a red tie. I’m sensing a theme.

Peter and Olivia talk to Greg’s widow, who says that Greg had a sleeping disorder but hadn’t had any dreams of demons in the last 2 months. In fact, he’d been sleeping for 8 to 10 hours a night. Peter asks for Greg’s dream journal. Olivia wonders if Greg could have been sleepwalking but Peter says that sleepwalkers are rarely violent. Also, they don’t remember their nightmares. They wonder how someone who got that much sleep could die of exhaustion. Peter tells Olivia that he used to have terrible nightmares as a child but that Walter taught him a mantra to help him sleep. Peter doesn’t remember any dreams from the time he was 8 till he turned 19.

Meanwhile, elsewhere in Seattle, a woman plows down a motorcyclist. She was on the phone with her husband at the time and was talking about monsters. The husband also notes that she didn’t have white hair when she left the house that day. 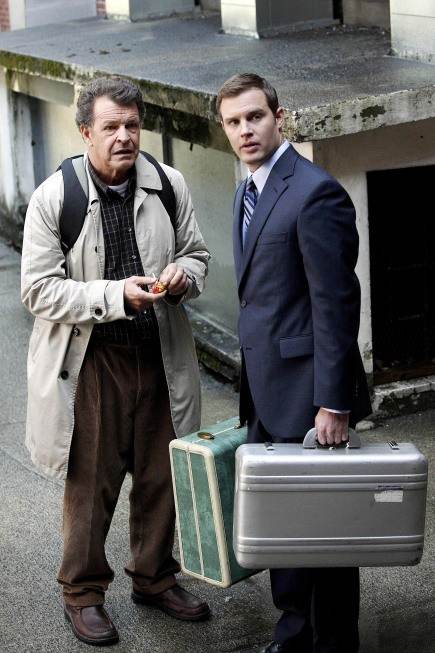 Kashner is so going to puke. He is assisting Walter as he autopsies Greg. Walter notices a scar at the back of Kashner’s head that shouldn’t be there. He reopens the incision and pulls out a microchip and filament. It’s enough to make Kashner hurl. Asterisk (Walter is upset) calls Peter, who is still at the car crash scene with the news. Peter finds a matching scar on the back of the driver’s head. The chip was connected to the thalamus, the part of the brain that regulates sleep.

Broyles meets with Nina at the Massive Dynamic offices. Nina is aware of the technology and that there is a study going on in Seattle. The chip connects with a computer to act like a mood regulator – a pacemaker for the brain. They were following the doctor running the experiment.

Peter and Olivia arrive at Dr. Nayak’s office. He informs them that there are 82 participants in the study and they all have a chip. When he goes to access a list, he discovers that his server has been stolen. His assistant Zach acts very suspiciously and runs away with some lame excuse. Hello, anvil. He tells Team Fringe that the chip cured sleepwalking, night terrors and all other REM based disorders. He and the nurses will try to reconstruct the list. (Okay, seriously, you don’t know all your patients and have no hard copy files? Not even an appointment book?) Olivia asks him for a business card because he is wearing something red (it’s a button or pocket kerchief or something.)

Peter and Olivia are still stumped. Why steal this technology. Walter gets on the phone with Peter and suggests that because the thalamus is connected to the cerebral cortex, there might be a way where it overrides motor control, thus giving the programmer the ability to use a person like a puppet. Peter asks Walter if he could make it work. Without using student subjects. Walter takes a good look at Agent Kashner and promises Peter he won’t use any students.

In a basement lab somewhere, suspicious Zach accesses the stolen computer files. He asks a guy who looks like Pinhead ‘s first cousin if he is sure he wants to increase the dose. Pinhead says yes. This causes a nice young restaurant worker to have a headache, which gives her hallucinations that her coworkers are demons who are roasting body parts on the grill. She grabs a knife and goes after them.

Kashner says goodbye to Walter. He is heading for the airport. Walter asks him for a favour before he goes. He holds up a beaker and says “Does this smell funny to you?” Kashner takes a whiff and passes out cold.

As Peter looks at the assembly line of patients having their chips removed (they have located 26), Olivia takes a moment and calls Sam. Has she been collecting business cards from people wearing red? Yes, she has. She has 8. Sam instructs her to choose one letter from the first and last name on every card. Then what? Jumble, he says. They will spell out a message that she needs in order to move on.

Olivia and Peter arrive at the restaurant. A survivor tells them how Diane-the-patient went nuts. Peter tells the local law enforcement that they must make an announcement to get the rest of Dr. Nayak’s patients to come in, especially considering the fact the Broyles let them know that the backup server has been wiped by someone with a password. Nayak says that all his employees are like family but that Zach has been acting strange lately.

Peter and Olivia break into Zach’s apartment. They find out that Zach is in the closet. Dead. Meanwhile, back at the office, Nayak finds a note stuck to the nameplate on his door. “Stop talking to the feds or you’ll end up like Zach.” 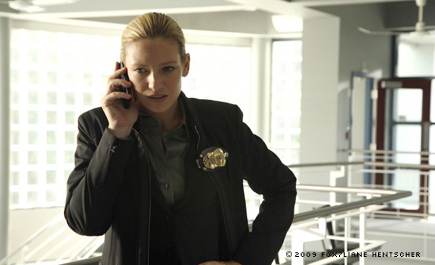 Walter has inserted Greg’s old chip into Kashner’s brain. He really shouldn’t have fed Walter after midnight. The other end is hooked up to his famous wired halo. If Peter is correct, he says, this should give him mind control over Agent Kashner. Walter tries some basic commands but Kashner doesn’t respond. Something else does happen, though. Either Walter accidentally took some LSD or the set up is not for mind control. The chip isn’t sending commands; it’s sending massive amounts of data. Walter is intercepting and receiving Kashner’s dream. Egad! Someone is stealing dreams. This is why the victims have been exhausted even after hours of sleep; the brain isn’t able to reach the REM state and thus the body cannot recharge. However, if the chip is activated while the person is awake, it causes hallucinations. Walter realizes that the stolen dreams are highly addictive and that whoever is stealing them is definitely an addict.

In his office, Nayak calls the blackmailer and says that he gave the note to the FBI, so the blackmailer might as well give up. Olivia drags Peter back to the hotel; she has an idea. If it’s an addict they are looking for, it’s likely that the person has two distinct personalities. However, their handwriting would be the same. She compares Nayak’s blackmailer’s notes with Nayak’s own handwriting; it’s a match. They’ve found their addict.

Meanwhile, Nayak arrives home and set himself up in his lair. He chooses another patient-victim. The man is in the cockpit of a seaplane which is about to take off. Nayak activates the chip and the pilot starts hallucinating. He knocks out his co-pilot and continues trying to take off. Unfortunately, his perception is screwy and what he thinks is the water runway is actually a direct path into a ferry. Peter and Olivia burst into Nayak’s house. When they can’t disconnect him from the machine, Olivia shoots the computer. Nayak dies and the pilot snaps out of his hallucination, just in time to pull up and avoid crashing into the ferry.

Back in Boston, Olivia visits Charlie’s grave. She takes another stab at the jumble and comes up with the following message. “Youre gonna be fine”

Peter has a nightmare. He is a little boy, in his room, at night. Walter comes in and Peter is not scared. And then Walter grabs him! He jerks himself awake. Walter is watching him and tells Peter that he was dreaming. Peter tells him the first part of the dream. “And the rest?” Walter asks. Peter shrugs it off.

Meh. Not my favourite episode. Dreams are really cool but not really fringy, although they did a decent job of working the science into it. What I’m really hoping for is a Peter-centric episode. All we’ve had is hints about his past and about his kidnapping. I’m looking forward to getting a big chunk of his history.