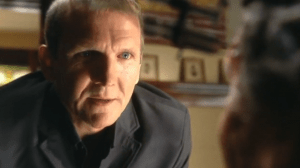 Previously, shape-shifting soldiers from the Other Side broke into cryogenic labs across the country looking for a specific frozen head. It belongs to the man whom William Bell warned Olivia about, a man who can open the door between universes and bring around the end of the world. Olivia was supposed to stop them from acquiring the head to save the world. She failed. Bad Guy Curtis Smith (they only just gave him the surname of Smith. I’m still calling him Curtis) set the defrosted head above a decapitated corpse and the head reattached itself…

Hennington Mental Health Institute, Boston. A male patient in a chair drones on about a little girl in a red dress with a flower in her hair. Another man – reattached cryohead man, whose name is Thomas Jerome Newton – keeps him talking while he works behind him. Eventually Newtown pulls something organic looking out of the back of the patient’s head. Newton’s accomplice warns that someone is coming. Newton apologizes for leaving the patient in “such a state” and takes off. A nurse enters the room and screams when she sees that the back half of the patient’s skull has been removed and his brain is exposed.

Team Fringe arrives. Dr. West tells them that Joseph Slater had been a patient for 14 years. Whatever happened to him drove him sane. There is no brain damage despite what was done for him. Walter asks to see video of Mr. Slater from when he was insane.

The video shows Slater ranting about the little girl in the red dress. Peter and Olivia talk to him. He doesn’t remember the last 14 years but seems perfectly normal now. He then goes off to have a rational conversation with the wife who visited him every week.

Walter is jealous. Slater got a visitor every week and he didn’t get one in the entire 17 years he was in his mental hospital. Peter feels bad but Walter insists he wasn’t trying to make Peter feel guilty.

Olivia and Peter watch the surveillance video. Peter notes that it only took them seconds to beat a superlock on the security door. Olivia freezes the video. She recognizes one of the men. She has photos of all the stolen heads and that’s one of them. Peter insists that dead men don’t walk into hospitals. Well, Pete, that one did, she tells him.

Broyles asks for an update. Olivia says that the name that was attached to the head was an alias. Bell told her that the man with the mark would open the door between worlds. That would be “less than desirable.” Broyles is skeptical – the opening move of armageddon is to cure a schizophrenic? Olivia says no matter what the next move is, she’s going to stop it.

Walter asks Astrid for Slater’s original files from before he was admitted. Walter thinks that someone may have deliberately driven Slater mad. Astrid learns that the admitting physician – Dr. Paris – does not exist in the medical database. And that this same phantom doctor wrote identical prescriptions for two other patients the same week.

Olivia and Peter go to another facility and find that a woman who suffered from OCD has been cured, also overnight. She used to be obsessed with the number 28. Peter examines her head – physically – and discovers a healed scar in her hairline at the same place Slater’s skull was cut open. She says that prior to her admission, Dr. Paris saw her for mild postpartum depression and sent her to the hospital “to rest”. Fourteen years later, she may finally be able to leave.

Newton tells Curtis that they took too long with Slater. They drop the piece of brain into a beaker full of liquid. Curtis says they only have hours to finish.

Peter is flummoxed. A woman was admitted with the equivalent of a cough and developed Ebola. Olivia is frustrated – how do you fight something you don’t understand? Peter reminds her that she is not fighting alone.

Dr. Paris’s third patient – who thought he was the old-time actor Sydney Greenstreet – also woke up sane recently with a fresh scar on the back of his head. Astrid reads off the medication he was on. That can’t be right, thinks Walter. That is an anti-rejection drug used for transplant patients and would not cure any kind of mental illness. (The big weak spot in the episode. In 14 years, no other doctor realized that or tried new meds?) Walter thinks that Dr. Paris may have been a genius. When brain tissue is removed, it can only be kept alive for a limited time because it needs the body’s electrical current. Dr. Paris was storing pieces of brain inside other brains. Astrid excuses herself to take a call. When she comes back, she pulls Peter away for a conference. Peter confirms with Walter that he never had any visitors. Nope, says Walter. Dr. West (Slater’s doctor) has no information on Dr. Paris but she checked with other facilities. Dr. Paris visited Walter on 6 separate occasions. Peter examines Walter’s head and finds an old scar.

Dr. West is about to do an MRI on Walter. He’s scared and asks Peter what Dr. Paris did to him. Peter says they will find out. Olivia joins Peter as he waits for the test results. Peter knows that Walter wants to turn back the clock to before he went crazy. He’s just sane enough to realize what he’s lost. Olivia says that, based on what she knows, going crazy made Walter a better person. Peter still feels guilty for not visiting but Olivia assures him that he is more than making up for it now. Dr. West returns with the MRI. Walter had three pieces of his hippocampus removed – the part of the brain that stores memories. Peter realizes that the three other patients where storing bits of Walter’s brain.

Walter is at home, trying to get over the drugs and the trauma of the MRI and results. He thinks he’s ODing on Valium and wants to listen to a particular album to calm down. Astrid offers to go get it for him.

Peter is putting the pieces together – figuratively speaking. This particular scene is a crystal clear picture showing that Peter is definitely Walter’s son – quick thinking, intuitive, and smarter than almost everyone else on the planet. Why remove pieces of Walter’s memory? Because Walter literally had the memories of how to open the door between worlds removed. How could the bad guys use these pieces? By hooking them up to a brain that could interpret the data. And there is only one Walter Bishop. (This last point may not be true, but it is for now.)

Astrid gets a call from Peter, telling her to get back to Walter ASAP. But she is too late. Peter tells her not to worry. Walter implanted a subdermal transponder – they can track him that way. Unfortunately, the bad guys seemed to know about it and cut it out of Walter’s neck. Peter and Olivia have no idea where Walter is.

Meanwhile, in Walter’s old beach house, Newton is hooking up Walter to some kind of memory device. Since the pieces were removed, Walter has formed new pathways to his memories and Newton must hook up the pieces to the correct places in Walter’s brain. In order to map Walter’s brain, Newton uses images to form associations. Almost everything Walter sees – a young boy, a custard, a coffin – reminds him of Peter.

Peter’s brain is working at full speed. He knows that almost everything Walter does is part of memory association (and now it makes sense why.) Peter thinks about the three other patients. He realizes all the clues are about him. When he was a boy he played with a little girl who wore a red dress. She lived across the street from his old house – 2828 Green Street. The bad guys have taken him to where Walter realized how to open the door.

The visual images aren’t going fast enough so Newton forces the reconnect. When it hits… Walter’s not Walter anymore. John Noble did a fantastic job of having a new character in an old body. The “old” Walter is a miserable, egotistical, scary ass and it’s no wonder Peter didn’t go to visit him. He’s evil. Walter talks to Newton and asks how things are going on the Other Side. Newton tells him that a blight has killed off most of the vegetation. Newton orders Walter to tell him how he opened the door.

Curtis tells Newton that Peter and Olivia have arrived. Newton injects Walter with something and runs for it. Peter rushes for Walter, who is once again the Walter we know and love. Walter is distraught as he sees his bits of brain in the beakers. They are dying and they hold memories he can never get back. Peter tells his father that he doesn’t need those memories.

Olivia checks out the rest of the house. She finds the owners tied and gagged in the back room. They tell her the bad guys went out the back door. Olivia flies out of the house and sees a vehicle pulling away. She fires into it, killing the driver. Then she shoots Curtis in the head. Newton stumbles from the back of the van.

Newton tells Olivia that he injected Walter with a neurotoxin which will kill him in 4 minutes. If Olivia lets him go, he will tell her how to save Walter. Olivia calls Peter, who confirms that Walter has collapsed. Olivia reluctantly agrees, tossing her phone to Newton and running back to the house. She gets Newton to tell her where to find the anti-toxin. Newton gloats that now he knows Olivia’s weakness. But Walter recovers.

Broyles debriefs Olivia. She beats herself up over making a personal rather than a professional choice. She chose to let a bad guy go rather than sacrifice Walter. Broyles says that it was a logical choice. He’s rather philosophical about the fact that they have more questions than answers. Olivia doesn’t believe him. They got no answers. Broyles says that she gave the enemy a face and a name. They will have other chances to get him. But she had to save Walter – he is the only one who can help them with their fight and they are going to need him.

Peter talks Walter into getting another MRI. As Walter enters the machine, he flashes back to his meeting with Dr. Paris.

Dr. Paris is William Bell. Walter was aware that it was Bell who was about to perform surgery on him… and what the results would be. Bell promised Walter that the information he removed – how to open the door – would be kept safe. Walter was a willing participant to his own insanity.