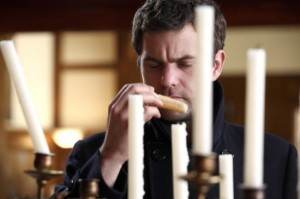 The episode opens at a Jewish wedding. All the guests are seated and waiting for the ceremony to start. A mysterious young man wearing glasses is standing in the back like a creep, and nobody seems to know who he is. In another room, the groom, David, is trouble breathing. His friends think he is having a panic attack because he is nervous about getting married. In the main room, David’s grandmother stands up and starts walking towards the bespectacled creep crying out, “It’s him!” Then she starts choking and falls to the ground. The same thing starts happening to several of the other guests–their faces are turning blue from lack of breath. The creep turns around and calmly walks away.

Olivia, Peter, and Walter arrive on the scene. Walter is reminiscing about his own wedding day and offers to let Peter borrow his purple tuxedo when he gets married. He asks if when that time comes, Agent Dunham will call him Dad, but Peter laughs it off. Walter begins to examine the bodies. There are 14 victims, all from the groom’s family. Olivia notices the number tattooed on the forearm of David’s grandmother and realizes that she was a Holocaust survivor. At first they assume that all the people who suffocated must have been poisoned by something they ate or drank. Olivia opens a door and the groom stumbles out gasping for air and clutching his inhaler.

Back in the lab, Walter is examining David on his table, bringing the victim count up to 15. He talks over the details of the case with Astrid, who notes that everyone who died was a descendant of Eliza Staller, the old woman who survived the Holocaust. Cutting into one of the bodies, they discover the blood is blue. Walter says that something was bonded to the hemoglobin in the blood that deprived the body of oxygen from the inside out. He suspects that David survived longer than his relatives because his inhaler weakened the toxin in their blood.

Meanwhile, Olivia is interviewing David’s mother (a Staller by marriage, so she was not affected) and asks if she noticed anyone at the wedding who wasn’t supposed to be there. Mrs. Staller recalls the creepy guy and how her mother-in-law reacted to him right before she collapsed. Olivia suggests that they look through the wedding video and see if she can identify him. Peter picks up a candle from one of the centerpieces and smells something strange. He tests it in the lab and Walter confirms that it contained the toxin which was activated by heat and released into the air. You can see his brain beginning to turn as he tries to figure out why it only killed specific people. The light goes off in his head: Nazis. They did extensive scientific experiments, with one of their goals being to developed a weapon that could target certain individuals. Walter is not convinced that these murders were the work of the Nazis, but he does believe that it was a science experiment and that the experimenter will test his weapon again to confirm the results.

In a coffee shop, creep-in-glasses orders a cup of tea. He speaks with a thick German accent. He sits down and chats with a woman and her daughter as he pours some dark liquid into his tea that makes it steam and boil. In the next scene, Peter, Olivia, Walter, and Agent Broyles walk up to the coffee shop, which is now surrounded by ambulances. Something has happened again, just as Walter predicted. This time there were 9 victims and none of them related. The toxin would have been delivered by some heat source. Olivia notices the empty cup of tea on the table. It has a blue residue on the inside and smells like cinnamon. Walter looks at the bodies on the floor. He finds a common genetic trait in all of the victims–brown eyes. “It’s a good thing you weren’t here at the time, Agent Broyles, or you’d be dead, too.” A crowd of people are standing outside the crime scene, and one of them is watching Walter. It’s none other than our enigmatic German villain! He asks the nearby police officer, who tells him that it is Dr. Bishop. He smiles to himself and softly says that he looks just like his father.

Walter uses a sample of the toxin to show a molecular model on the projector in the lab. He shows Olivia, Peter, and Astrid how it can be programmed for any group with common physical characteristics. He lists off the components of the poison, which includes one chemical that Peter says is highly regulated so they can search for companies that use it. Then Walter calls their attention to the signature in the toxin, which chemists will often use to brand their work. In this particular case, it looks like a seahorse. Walter’s face darkens because he now knows who made it–Dr. Robert Bishop, his father, who did research at the University of Berlin in the early 20th century before he came to America in 1943. Walter assures Peter that his grandfather wasn’t a Nazi but actually worked for the Allies to sabotage German research. He smuggled information about the Nazi experiments back to the US written inside of books. Walter searches through some boxes to find the books, but Peter tells him that he sold the books years ago when he needed money. Walter blames him for letting that toxin formula fall into the wrong hands and kill all those people. Somebody sneaks into Walter’s office late at night–the German! And he’s eating an apple…

The next day, Olivia explains to Broyles about Walter’s dad and the books. She and Peter are entering the used book store where he sold them. The store keeper goes to check his records to see if he can find out who bought them. Olivia and Peter talk for a few moments about why he sold them. She knows that it couldn’t just have been for the money because Walter probably had more valuable stuff. He admits that he did it to get back at his dad because they were some of Walter’s favorite possessions. The clerk comes back with the name Eric Franco and an address, saying that Eric “struck him as a real weirdo.” Peter and Olivia head off to pay him a visit. The house appears to be empty, so they go in to look around. The place is decorated in swastikas and Nazi memorabilia. Eric comes out of the shadows. He is a young, nervous kind of guy, who insists that he is not a Nazi, just an artist. Peter asks about the books. Eric shows them that he used some of the pages to make a collage of Hitler. Peter takes it to the lab and shows it to Walter. They are now at a loss as to how the killer got the formula with Robert Bishop’s seahorse signature if not from the books. Astrid has run some tests on the DNA that Walter recovered from the tea cup. Walter is discouraged by the results which indicate that the killer would have to be more than 100 years old, which seems highly improbable. Peter notices an illustration for the “master race” on the Hitler collage and suspects that the killer might be trying to accomplish Hitler’s vision for a purified Aryan race. At that time, the evil glasses man is performing another experiment to test the dispersion rate of his toxin. The steam explodes from a canister and spreads out through the area.

Olivia brings a list to Walter and Peter of the orders placed for that chemical in the toxin. One is under the name “Hoffman Biological” and gives a residential address. An FBI team swarms the house. Alfred Hoffman, the killer, is downstairs forging an ID badge and hears them. He boxes up his chemicals and puts a beaker full of some purple liquid on the burner before he leaves. Walter finds a case full of labeled vials, each for a different physical trait: “Creating a master race by process of elimination.” Peter picks something up from the desk and recognizes it as Walter’s sweater. The steam starts rising from that aforementioned liquid and Walter gasps for breath. Peter carries him out, gives him an oxygen mask, and he’s fine. Olivia shows him a sticker from the remains of the fake ID. Peter knows the logo to be for a world tolerance conference held annually at the Boston Center for Performing Arts. He and Olivia rush off with a team of agents to apprehend the killer. Hoffman has already arrived and disguised himself as a waiter. He replaces the candles under the hot food buffet with his blue candles containing the toxin. Back at his house, Walter goes down to the basement to retrieve his sweater and gets distracted by all the chemicals. Astrid comes in to find him holding up a test tube that he says will put an end to all of this. Peter and Olivia are rushing around the performing arts center looking at candles, coffee urns, or anything that could be hot enough to activate the toxin. Peter finds the candles at the buffet, but then they hear someone choking over in the area where an African woman is making a speech about ending discrimination. Hoffman falls to the floor and cries out, “Bishoff!” pointing up to the balcony where Walter is blowing steam out of what looks like a hair dryer. He had created a toxin to target Hoffman’s DNA. Walter tries to make Olivia understand that he did it because Hoffman had corrupted his father’s work. He says that there’s nothing he wouldn’t do for his family. (That kind of mindset is a dangerous one to have–it makes you capable of anything, as fans of J.J. Abrams’ other show, Alias, would be all too familiar from the Jack/Sydney relationship).

In the end, Peter brings Walter a box with what was left from his father’s books. You can see how much Walter cherishes them as he thumbs through the pages. He thanks Peter for returning them, and it is clear that he has forgiven his son. Peter poses the last lingering question: how did Hoffman know the formula if not from the notes in the books? Walter replies, “Perhaps there are some mysteries that are destined to remain unsolved.” The camera zooms in on a photograph of Robert Bishoff (he didn’t change his name to Bishop until he got to America) as a young man in his lab. In the background, stands Hoffman looking just as young and creepy as he did for the entire episode. I, for one, was glad they left that mystery unanswered. It leads me to believe that the Nazis could have done some research that experimented with eternal youth, or something even more sinister. A very good episode overall- I’m always most intrigued by the ones that seem eerily possible.

Next week, we return you to your regularly scheduled recap from Featherlite!