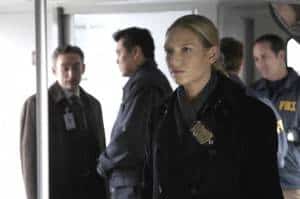 Oh, dear. I appear to have found my snark. Hold on, here we go…

Commuter train station. A panhandler kid with a sign saying ‘God will be watching” begs for change and then, when unsuccessful in requesting donations, pickpockets a guy’s wallet. Kinda makes the sign a little ironic, doesn’t it. On a train which is pulling into the station, lights flicker and the passengers get mildly annoyed. Suddenly a man appears in the aisle. The train pulls into the station and stops. The man disembarks. The kid approaches and gets brushed off again. (That word is going to appear often in this recap. Get used to it.) The kid boards the train and discovers that everyone on that train car is … dum dum dum… DEAD!

Meanwhile, back at Casa Bishop, Walter sits at his desk writing a letter to Peter. The answering machine goes off so whomever is in the house can hear the message. Peter gives his dad detailed instructions on how to pick up the phone and then leaves a message when Walter doesn’t. (By the way, does anyone have this type of answering machine anymore? Doesn’t everyone just have voicemail now?) Anyway, Olivia called Peter, who is soldering something somewhere, probably at the lab, and told Peter that there was an incident on a train. Peter thought this news would cheer up his dad because he knows how much Walter loves trains. Peter will be there in 15 minutes to pick Walter up. Walter seals the letter and puts it in his pocket.

At scene, Peter tells Olivia that Walter has been avoiding him all week. He thinks Walter is sad. Olivia lies her butt off and says she hasn’t noticed anything. On the train, Walter looks at all dead bodies. He checks their eyes. And then their underwear. At which point a cop tells him to leave. Really, lady, you don’t worry about strangers contaminating the crime scene until they go for the undies? Methinks you need a refresher CSI course. Walter tells her that in cases of sudden death, victims often void themselves. (Did you really need to know if that was true? I’m just trying to be helpful.)

But how did they die, Walter? There’s nothing too outlandish for our show. ‘My first thought,’says the great Dr. Bishop, ‘is that they are all dead of a contagious or sympathetic heart attack.’Well, that was my first thought too. Olivia notices that all the lights in the next car are still on. She asks Walter if the fact that the lights in their car aren’t working is relevant to his theory. Yes, Olivia, it is. Broyles pops onto the car to get Olivia so they can question the panhandling kid.

Meanwhile, on the train car, a FBI officer finds Peter’s envelope under a seat. Walter panics when he sees it and reclaims it just before Peter comes back. Peter notices that all battery powered devices are dead. Walter thinks that his ‘everyone died of heart failure’theory is correct but he’ll need six or seven bodies sent to the lab to be sure.

Outside, Broyles and Olivia discover that they have a security camera picture of the man who got off the train.

In the lab, Astrid and Walter examine the bodies. They note that the ATP (don’t ask, I was distracted during this scene) curve is far below average. Something drained the people like it drained the batteries. Peter wonders aloud, ‘What could do that?’Walter responds with a helpful, ‘I have no idea.’

Broyles does some nifty FBI work and tracks down the train guy from a series of security cameras from surrounding businesses. They go into a diner and discover that Mystery Man used a credit card to pay for a meal. His name is Peck. Once they have the credit card number (Attention future killer time-travellers: always pay cash), they track Peck down to his house.

Inside they find Dr. Peck’s MIT diploma. The walls and chalk boards are covered with equations. Walter isn’t sure exactly what they signify but whatever Peck was doing dealt with tremendous amounts of energy. Peck watches from across the street as the FBI dismantle his house. He goes in and confronts them, telling them that the calculations aren’t there for them to take.

Up on the second floor, Olivia finds a bunch of bloody medical instruments and odd metal bits. (Not drill bits, just metal bits like wires and such.) They race downstairs once they hear the Fibbies on the main floor have Peck in custody. Olivia accuses him of killing 12 people, but Peck insists that hey aren’t really dead. Buddy, they’re not only merely dead, they’re really most sincerely dead. When they go to cuff him, Walter notices the wires and metal sticking out of Peck’s forearms. Peck begins concentrating and his body flickers. Walter realizes what the wires mean. Peck has created a Faraday cages within his own body to create a temporal shield. ‘That’s fantastic!’Walter exclaims.

It’s a pity he won’t remember it because Peck snaps out of existence and reappears on the train. Panhandler Kid approaches him again, asking for spare change, and again Peck brushes him off. But this time he apologizes to the kid. ‘I’m sorry you have to go through this again.’