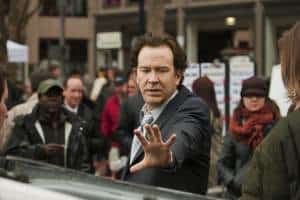 The con is back on! Less than four months after Nate Ford and his band of rogues busted the insurance company that allowed his son to die, they’re back for an all-new season of capers.

We’ve moved a few months later and from Los Angeles to Boston, where Nate is on the verge of accepting a job with another insurance company before he realizes he’s not happy with that. He’d rather go have another drink (he’s quit drinking, or has he?), but before he can cross the street to the bar, he’s nearly killed by a car which strikes a lamppost and flips over him (only on TV, people). Being the good guy he is, Nate rescues the driver and his daughter before seeing a hoodlum make off with a briefcase in the backseat. Something’s not right here: the brakes on the car have failed, and the driver happens to be an employee of a soon-to-be-bailed-out bank. Nate is understandably suspicious.

For whatever reason, he turns up to a theater where Sophie is starring in a production of The Sound of Music. (Unfortunately for me, this version does not include John Barrowman or Zoe Tyler.) So have the rest of the team, who all say they’ve been doing fine adjusting to normal life. We only find out later that they’ve been doing anything but: in Hardison’s case, hacking the White House; in Parker’s, stealing the Hope Diamond. They feel directionless without the team, and try to persuade Nate to restart things, but he won’t hear of it. He goes back to his new condo (above the bar, no less) where the thug from earlier tries to kill him. Sophie comes to his rescue — by knocking him out with a sheet pan. You have to love Leverage and its mix of intrigue and utter hilarity.

When Nate comes to, he finds the whole team has invited themselves into his condo — with Parker in a nun outfit — and are trying to figure out who hit him. (Nate: ‘You thought Parker dressed up as a nun for no reason?’Eliot: ‘It’s Parker.’) Turns out the outfit is so she and Hardison can get into the bank and see what’s in the safe deposit box belonging to the injured guy’s boss. As it turns out, it’s incriminating paperwork connecting various businesses to the mob. Nate correctly deduces that the bank is in the pocket of the mob, who know that the bank is going to get bailed out by the government anyway, and the poor injured guy must have figured it out. He finally agrees to do the one job (which we all know won’t be just this once), getting the bank to turn on the mob.

Parker and Hardison continue their great tradition of playing fake federal agents, while Eliot, Sophie and Nate play their usual shady characters. The bad news is one of the mob guys recognizes Nate, but he manages to talk his way out of it. Eliot uses remote detonators to scare the bank chief into calling the fake feds in…except he doesn’t. He goes directly to the mob, and the whole thing becomes a massive pain in the behind.

The team turns the tables by pretending Eliot was an undercover state trooper who’d been talking to the mob guy, making all the bad guys turn on each other. Hardison and Parker show up just in time to ‘rescue’the mob guy and convince him to cut a deal to give up the bank guy — who as it turns out was trying to have the poor injured bank employee killed by cutting the brakes on his car. He goes to the hospital to finish the job and is met there by the real state police. (And one cop who looks suspiciously like Josh Charles.) In flashback, we find out that Parker’s little nun incident was set up to clear out several safe deposit boxes and make it look like the bank chief was trying to take down his own bank. The team gives the injured guy and his daughter the profit they get from reporting the bank fraud, and Nate even has a cute bonding moment with the poor guy’s disillusioned teenage daughter, not unlike he might have with his own son. Aww. It’s that moment which convinces him to try just one more last job.

And the world is better off once more.

It’s another fun-filled, action-packed episode of Leverage with just the right amount of poignancy (as Nate finds out Sophie now has a boyfriend!) and humor (as Hardison and Parker retrofit Nate’s condo for their new HQ, Hardison having bought the building and become Nate’s new landlord). What did you think? Sound off below, and take a look at these great lines of dialogue from the episode.

Parker: When you’re sober, your metaphors get creepier.

Nate: Now if you’ll excuse me, I’m going to call a professional killer who tried to murder me, and arrange to meet him in an isolated location. 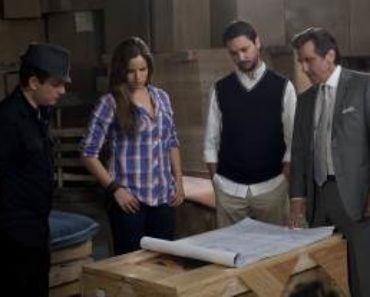