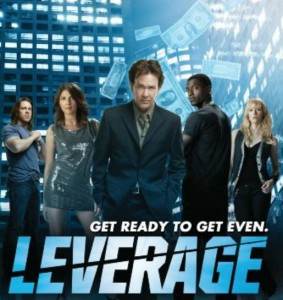 Who loves a good conspiracy? How about Hardison and Eliot rescuing people from fake FBI agents? That’s how this week starts.

After all that, the young woman they rescued meets with Nate to talk about her sister and a drug trial. Her sister died, they sued and got nowhere, except for swarmed by fake FBI agents. Of course, this is right up Team Leverage’s alley.

Eliot goes to investigate the doctor’s house, and doesn’t find anything but a flash drive. Hardison does what Hardison does, and finds out the doctor was meeting with the CEO of the company that bought the pharmaceutical company. Nate is unimpressed (and drinking again). That’s when Eliot finds the murdered doctor, and we realize that this is going to get a lot more complicated. Sophie and Parker don’t help when they find all the other people involved in the drug trial are also dead. As Nate explains to Sophie, it’s all one big cover-up.

The plan starts with Parker posing as a new pharmaceutical rep to break into the CEO’s office, while Sophie pops in pretending to be part of the FDA. Meanwhile, Nate and Hardison discover all the illegal bribes the company has offered to people involved with the drug trial…and that the company planned to release the experimental drug to the public, which means a lot of people are going to die. Their only hope is to find the sample and get it to the real FDA rep, exposing the problems. It would help if they didn’t alert security. Nate’s still drinking.

He finally makes a play, turning up as a friend of the dead doctor and attempting to blackmail the CEO out of a few million dollars. This is enough to get the CEO spooked and he leads them right to the drugs via a GPS Nate planted on him. Parker gets sent in to retrieve them, while Nate is crazy enough to agree to meet the CEO even if it means he might die. Nate is always crazy like a fox. At least he has Eliot to back him up.

While the boys are trying not to get killed, Hardison is guiding Parker into the vault to retrieve the drugs. Unfortunately she triggers the motion sensors, and alerts security, also known as two generic white guys in suits. She manages to escape by locking them in the vault, but not before Nate gets lifted since he’s obviously the prime suspect. The CEO has figured him out. Of course he’s also stupid enough to disclose his plans to Nate, who glibly confesses they spiked the champagne he’s drinking. And this is when the real FDA rep walks in…and we get the public reveal of our team members to an officially whimpering bad guy. The poison statement was a lie, just enough to make him publicly humiliated.

‘I wasn’t going to put any of you at risk if I wasn’t willing to take the same chances myself,’Nate says to an unimpressed Sophie. Her response? ‘I’m glad you think that’s comforting.’

Hardison gives their client a big check — a percentage of the fine the FDA leveled against the company — to go help the other victims. Meanwhile, Sophie urges Parker to tell Hardison how she feels, because she’d rather glare at the client instead. Parker and Hardison then have the world’s most awkward conversation, before she finally stammers out that she has feelings for…pretzels. Yep, another missed opportunity. Or is it a metaphor? The look they share could go either way. But that’s a story for another episode.

A bit complicated, but not a bad episode. What did you think? How does this stack up against the other episodes of season three?