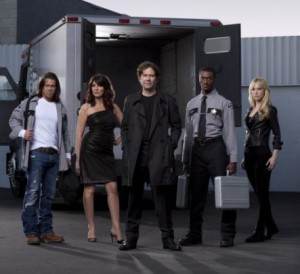 An episode with multiple points of view is a tricky thing to do. It can either go really well (does anyone remember NBC’s Boomtown?), or it can get repetitive and muddled (like, well, the bad episodes of Boomtown). This week, Leverage employs the device in order to shed more light on our protagonists’backstory, by showing us what happened when they were all after the same artifact.

Everyone is hanging out at McRory’s, talking about the Dagger of Aqu’abi, now on display at a local museum. All of them want to take credit for stealing it five years ago, and all of them think the others are lying. Sophie’s idea is to tell Nate their individual stories and let him decide who’s telling the truth. Each of them relate their different versions of what happened that night.

Sophie makes her entrance into the museum as a duchess and art donor, schmoozing with the financier who actually owns the dagger in question. He’s worried that this will be the fourth thing he’s had stolen. She’s busy dosing a security guy to get his keycard and bumping into doctors (or at least people who like to say they’re doctors). There’s a brief power surge, after which the guy she doses is in the middle of an allergic reaction. The whole scene allows her to slip away and into a storage closet, where she assumes the identity of a restoration expert. However, the medical emergency creates a lockdown, which only complicates her plan to slip out undetected. The head of security doesn’t like her very much, either, and soon he’s got everyone looking for her — but not before she’s come prepared with an address label that ensures the dagger is mailed directly to her alleged estate in Europe.

However, we find out that when the crate arrived, the dagger was nowhere to be found. She was had.

Eliot helpfully volunteers that he was the alleged doctor that she ran into at the party. Before that, he was dispatching a couple of people who were trying to kill him, sent by a guy who isn’t happy with his work. The guy says he needs the dagger retrieved for a client, and that would make them even. Eliot doesn’t have a choice but to play along.

He’s in the real doctor’s backseat, before he takes everything he needs from the guy and leaves him in the trunk. He’s on his way downstairs when he bumps into Sophie (who hates his version of her accent, so she decides to edit her version to make him look like a redneck). The way he tells it, she pretty much volunteered him to save the dosed guy’s life. He takes the guy into the first aid station, then leaves him there to head downstairs, where he overhears the head of security talking to Sophie. We find out that Eliot tackled a security guard, stuffed him in the same storage closet, and stole his uniform.

As the shipping crates are all getting loaded, and he’s busy opening all of them to look for the dagger. However, he doesn’t find it in Sophie’s crate…just a coffee mug. So who got to Sophie’s box before he did?

Hardison finds this all hilarious. He got involved trying to make his name hacking the museum’s then-allegedly unhackable (you know, like the Titanic was unsinkable) security system. We also find out he still lived with his mom at the same time he was trying to pick up women. Smooth, Hardison!

To him, the power surge means the security system is resetting, also known as his perfect opportunity. He fakes a minor medical emergency, and we find out he was the poor guy that Sophie dosed (he can’t get her accent right either). He doesn’t have a shrimp allergy, he was just caught out in the wrong place at the wrong time. Also, he thinks Eliot is a psychopath the first time they meet, because Eliot tried to open his airway with a giant knife. However, once Eliot is gone, Hardison jumps onto the nearest computer and finds out the dagger is now in a storage vault. He plans on going to fetch it using his own swiped security uniform, and taking it as a trophy. However, he gets stopped by the head of security, who’s still looking for Sophie. He shoves him into the storage closet with the guy Eliot knocked out earlier.

However, when he gets to the vault, it’s empty. Which means there’s only one person who could’ve gotten there before him…

Parker’s the waitress who’s been there the whole time. She was just waiting for the right moment. We see her walk by Sophie (and to Parker, Sophie’s accent sounded like total nonsense, leading Sophie in the present day to exclaim “I hate you all”), and get accosted by the head of security. However, she correctly identifies the tampering with the security system, and just so happens to have the giant knife that Eliot almost turned on Hardison.

She sneaks away to see the security guard putting the dagger into the storage vault just like Hardison intended, and as soon as he’s gone, goes to get it. Too easy, right? She’s holding it in plain sight as she goes through the air vents (you expected anything else from Parker), which makes it kind of obvious when the head of security pops up out of nowhere. The dagger comes loose and falls down the air vent. So if she didn’t get away with it, how did it leave the museum that night? There’s nobody left, right?

Nate decides to straighten everyone out. He was there that night on behalf of IYS, working with security. To him, the head of security is a flustered dork with a huge crush on Sophie, and Eliot is busy spitting out the doped champagne Sophie intended for Hardison. Everything else plays out pretty much as we’ve just seen it happen, except all the pieces are put together now. When the head of security comes back upstairs, Nate points out all these weird coincidences that are happening around them.

After the head of security ends up in the vents being punched by Parker, Nate goes looking for him. Which means Nate is standing right there when the dagger drops from the ceiling into his hand. The dagger was never really stolen; it was just reported stolen. He’s figured out that the three previously reported thefts are all part of an insurance scam, and he tells the financier that IYS will take the dagger as an asset and they’ll report the theft to set up the guy’s dealer – the guy that Eliot crossed. Unintentionally, Nate saved Eliot’s life.

The dagger is now owned by the CEO of an oil company that nobody likes very much, and just like that, everyone decides to go ruin his day. They’ve been reminded that they’re better as a team.

This may be my favorite episode of Leverage this season. The point-of-view device was executed perfectly; it was easy to follow, and the show didn’t waste time repeating too much (unlike Boomtown, which sometimes seemed to be repeating half the show). It was hilarious to see how everyone’s flashbacks differed, especially in the brutal butchering of Sophie’s accent, and Gina Bellman’s classic reaction to it. There may not have been an actual theft, but the narrative was interesting and entertaining, and the show deviated from the formula in a way that made the hour fly by. Kudos to the cast and crew for a wonderful job on a great hour of television.