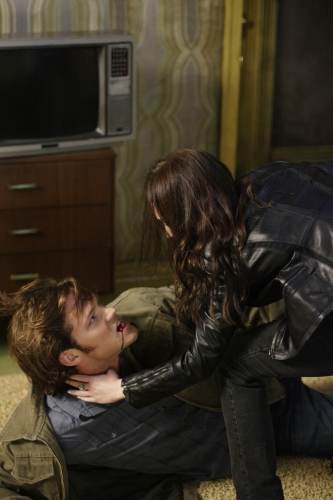 Bobby turns up with the Impala (Yay!) and the trio set out to try to figure out what is going on. The sword was used by Michael to vanquish Lucifer from heaven. Sounds like something they may need.

Sam decides it is confession time and reveals to Bobby that he broke the final seal that allowed Lucifer entry to Earth. Bobby is mad and tells Sam that if by some chance they make it through this ‘You lose my number.’Sam leaves.

Dean has a flash of intuition and grabs the address card for his father’s storage shed. Castle storage, 42 Rover lane. Solved! On that note, Bobby’s eyes go black and he attacks Dean. More demons enter, lead by an old favorite — Meg — in a brand new meat suit. Bobby is about to stab Dean when he fights his way back to the surface and stabs himself with the demon knife. Sam returns and provides enough distraction for Dean to get the knife, and the upper hand. Meg abandons her meat suit and disappears in a cloud of smoke.

Back at Nick’s house, he is packing up baby stuff. He hears a baby crying from the bottom of the box and reaches in, pulling out a baby monitor. He races to the room of his child, and the sound stops. He turns away, and the crying starts again. When he turns this time, blood begins to seep from the crib. Panicked, he runs to the crib and finds that, again, it is all an illusion. None-the-less, with all of the imagery, it is pretty clear something awful has happened to this guy.

The Castle On 42 Dogs

After dropping off Bobby at the emergency room, Sand and Dean race to head off the demons at their father’s storage shed. When they get there they find dead demons all over the place, and their good buddy Zach and his henchmen in tow. Zach blows our minds by revealing that Dean is the Michael Sword! 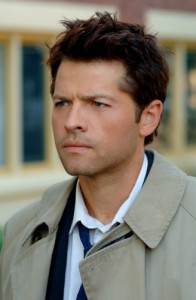 We suffer through a cruelly positioned commercial break before we find out what Zach meant: Dean is the chosen vassal for Michael. After a bit of antagonistic back and forth between Dean and Zach we learn the Angel’s dilemma, Dean must give Michael permission to take control of his ‘˜vessel.’Dean refuses, telling them he doesn’t want to live ‘…life as an Angel Condom.’

Zach begins to physically torture them, first telling them that he will make Bobby paralyzed, then he breaks Sam’s legs, gives Dean stomach cancer, and removes Sam’s lungs — Dean still refuses to submit, and Zach tells him this torture is only the beginning. Before he can inflict anymore harm, though, Castiel appears and takes out the angel henchmen. Zach wants to know how he survived the archangel, and Castiel says he didn’t. Zach wants to know how that could be, and Castiel says in so many words that God has reconstituted him and saved the boys as well, he orders Zach to put them back and leave, Zach obliges.

Once Zach is gone, Cass puts a hand on each of the brother’s chests (and he doesn’t say anything about firmness, don’t worry) and they yelp in pain. Cass tells them he has marked them and the mark will keep them off the Angel’s radar. Dean asks if he has branded them, and Cass says he etched the symbol into their ribs. Yipes.